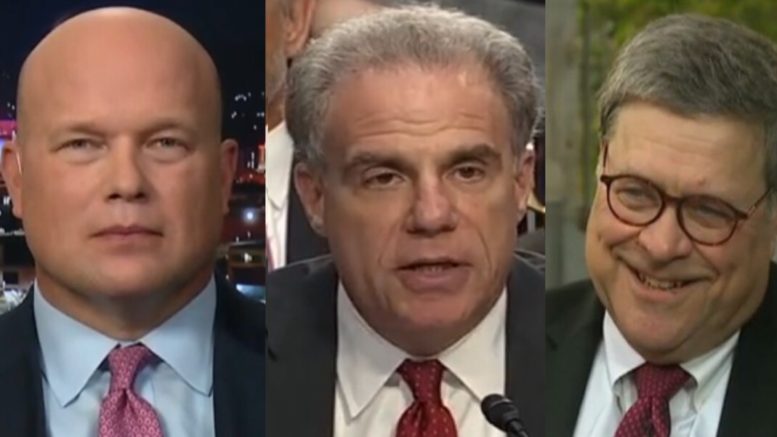 On Friday, Department of Justice (DOJ) Inspector General Michael Horowitz notified Attorney General William Barr of the completion of his investigation into possible abuses of the Foreign Intelligence Surveillance of Act (FISA) by DOJ officials during the 2016 presidential election. After the DOJ has a chance to review and comment on the report, it will be sent to the Judiciary Committee and made public, according to a letter sent to lawmakers.

Former Acting Attorney General, Matthew Whitaker, spoke with host Lou Dobbs on Fox Business after the DOJ watchdog submitted his report, calling on Attorney Barr to “take action”, should there be wrongdoing.

“This is where Attorney General Barr has a real opportunity to preemptively– if there are punishments that need to be meted out, if there are people that need to have disciplinary findings, for example, Bruce Ohr is a prime example,” Whitaker explained.

“If there was FISA abuse, if there was someone who did something wrong and should be subject to punishment, or even prosecution, the time is now for Bill Barr to take this report and take action, Whitaker urged. “And soon enough we will all see what happened and don’t forget, [John] Durham is still looking at the origins of this investigation. But this FISA piece is such an important piece, where now actions can be taken against rogue employees or those that did wrong.” [Emphasized].

Horowitz, in his letter to lawmakers, reads in part, “My direction to our team has been to follow the evidence wherever it leads and to complete the review as quickly as possible. Consistent with this guidance, the team has reviewed over one million records and conducted over 100 interviews, including several witnesses who only recently agreed to be interviewed. We have now begun the process of finalizing our report by providing a draft of our factual findings to the Department and FBI for classification determination and marking. This step is consistent for our process with reports such as this one that involve classified material.”

“We’re finally gonna see how this investigation started, how a FISA [be]came for Carter Page, and how the [Steele] dossier was used in that investigation. And from where I sit, and from what I know, I think it’s going to be fairly dramatic what this investigation is gonna show, because as you know, it now appears that actually, the Russia collusion was with [Christopher] Steele and the Democrats who paid for this dossier that was used as the foundation for this investigation,” Whitaker said. (Continued Below)

“I think this is such a critical moment on behalf of the American people and the Department of Justice to show everything that went into this so that we can know and make sure this never happens again,” Whitaker continued.

He noted that the entire Department should guard against the wrongdoings that took place. “That is the weaponization of oppo-research. We can not have investigations launched the way this appears to have been launched based on an unverified, scurrilous, as Jim Comey even called it– oppo-research, that is then used as the basis for a FISA application, it appears. And then, in addition, as a basis to launch this special counsel investigation that unfortunately, hamstrung the President for too long,” he stated.

Whitaker believes that the Department of Justice under Attorney General William Barr will recover, adding that “It will be an important moment in our nation’s history when the evidence and information is finally given to the American people, so they can judge for themselves.” (Video Below)

Ranking Member of the House Judiciary Committee, Rep. Doug Collins (R-GA) sent a letter on Friday to Chairman Jerry Nadler (D-NY) calling on him to hold a hearing on the results of the Justice Department Inspector General’s investigation of possible abuse of the Foreign Intelligence Surveillance Act.