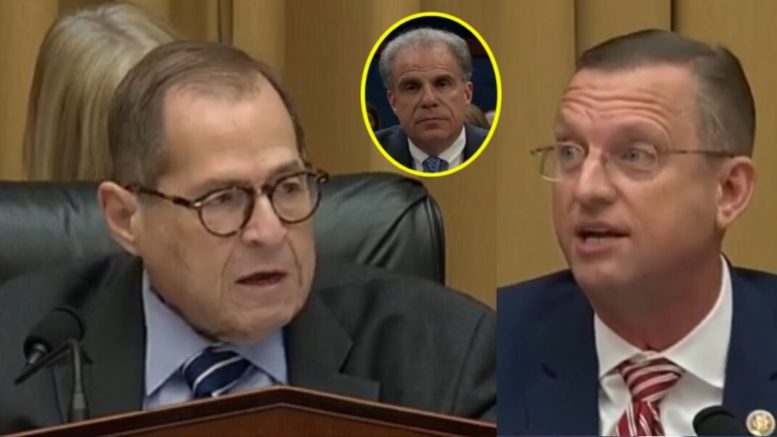 On Friday, Department of Justice (DOJ) Inspector General Michael Horowitz notified Attorney General William Barr of the completion of his investigation into possible abuses of the Foreign Intelligence Surveillance of Act (FISA) by DOJ officials during the 2016 presidential election. After the DOJ has a chance to review and comment on the report, it will be sent to the Judiciary Committee and made public, according to a press release.

Ranking Member of the House Judiciary Committee, Rep. Doug Collins (R-GA) sent a letter to Chairman Jerry Nadler (D-NY) calling on him to hold a hearing on the results of the Justice Department Inspector General’s investigation of possible abuse of the Foreign Intelligence Surveillance Act.

As you know, FISA oversight falls squarely within the Judiciary Committee’s jurisdiction. We must act swiftly to address concerns outlined in the Inspector General’s report. Accordingly, I write to request you schedule a hearing as soon as possible following Congress’s receipt of the report. Further, I request that you invite Inspector General Michael Horowitz and Federal Bureau of Investigation Director Christopher Wray to discuss the findings of the investigation at that hearing.

In accordance with the Committee’s jurisdiction under House Rule X, it is critical that the Judiciary Committee be the first House committee to query the Inspector General about his findings and Director Wray about steps he is taking to ensure any abuses do not reoccur. Members of the Judiciary Committee on both sides of the aisle have unique expertise regarding FISA, making our Committee best equipped to directly address the concerns contained in the Inspector General’s report.

I look forward to working with you to schedule this important hearing. (Continued Below)

The Ranking Member took to Twitter on Friday and posted his letter along with writing, “Oversight falls squarely within the Judiciary Committee’s jurisdiction. We must address concerns outlined in the IG’s report. I’m calling on the chairman to schedule a hearing as soon as possible after Congress receives the report.”

Inspector General Michael Horowitz opened an investigation March 28, 2018, into the FBI’s applications for FISA warrants against former Trump campaign aide Carter Page. His office interviewed more than 100 witnesses and reviewed more than 1 million documents in the probe. (Video Below) 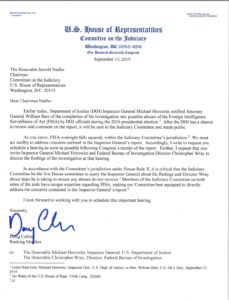 #FISA oversight falls squarely within the Judiciary Committee’s jurisdiction. We must address concerns outlined in the IG’s report. I'm calling on the chairman to schedule a hearing as soon as possible after Congress receives the report.https://t.co/FIyuI7nXDb