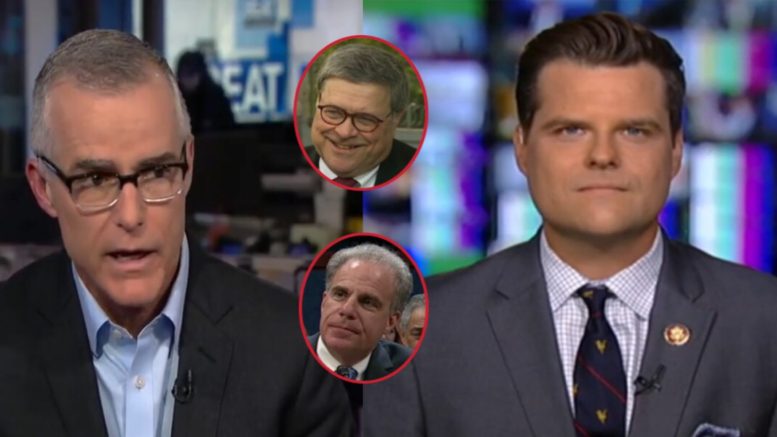 Congressman Matt Gaetz (R-FL) spoke with Ed Henrey on Fox News Friday where he weighed in on prosecutors moving forward on charges against former Deputy Director of the FBI Andrew McCabe.

District of Columbia U.S. Attorney Jessie Liu has recommended moving forward with charges against former FBI Deputy Director Andrew McCabe as the Justice Department rejects a last-ditch appeal from the former top FBI official, as reported by Sara A. Carter.

Asked point-blank if he believes justice is finally coming for Andrew McCabe and others, Rep. Matt Gaetz replied, “We do. On the day that Jim Comey was fired, Peter Strzok sent a text message to Lisa Page saying, ‘We better get that case opened we’ve been talking about while Andy is the acting director of the FBI.'”

He noted that McCabe appears to be at the center of both of the investigations. “[He appears to be potentially at the business end of an indictment for his false statements where he was trying to shape the media narrative regarding how the FBI and the Department of Justice were interacting on the Hillary Clinton email investigation,” the House Judiciary Committee member said.

The Florida Congressman assured that justice is coming as recent reports indicate that McCabe’s lawyers made their “last-ditch appeal” to the senior leadership of the Department of Justice to receive “special or different treatment.” He added that the reporting indicates that the DOJ is going to apply the law equally to everyone. “That means Andrew McCabe, it means the President, and I think that is the right standard,” Gaetz stated. (Continued Below)

“But here, the facts have Andrew McCabe dead to rights. He lied to [James] Comey, he lied to the Inspector General, and he lied to the internal affairs investigators, who had determined that he had authorized the release of information that disclosed the work that was being done regarding the Clinton Foundation,” Gaetz explained. “Very serious, and no real dispute on those facts.”

Ed Henery noted it’s also alleged that McCabe tried to throw others beneath him under the bus and blame them for the leaks.

“Well, beneath the man above him, which ripens the questions you asked Andy about Jim Comey, because McCabe said, ‘Well, Comey knew about all these things.’ Comey disputes that, so now we’ve got some of the swamp creatures chewing on each other for once,” Gaetz expressed. [Emphasized]. (Video Below)

Related: Catherine Herridge Exposes Fmr. Obama Officials Turning On Each Other Over The Dossier