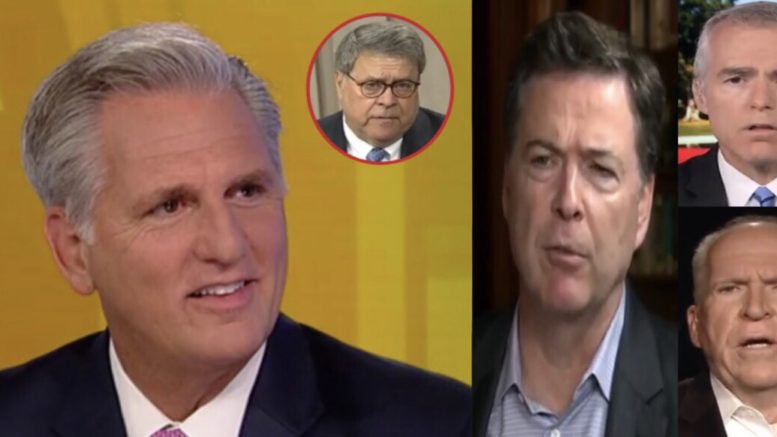 McCarthy predicted that former FBI Director James Comey and former Deputy Director Andrew McCabe will face criminal charges after point-blank stating that it was an attempted “coup” to take down President Trump.

As reported by Fox News, the report will address concerns with whether or not the FBI acted improperly in obtaining a FISA warrant to monitor former Trump campaign adviser Carter Page in the early stages of their investigation of Russian election interference and possible Trump campaign connections.

“I can’t thank Devin [Nunes], John Ratcliffe and [Jim] Jordan, and the others enough for how much they have done on this. What we were finding, remember we had to pull this information out. There were people at the highest levels in the government that were causing this problem,” McCarthy said.

Asked if there will really be accountability, McCarthy assured, “Yes.” (Continued Below)

Both Comey and McCabe have been the subjects of separate IG investigations, and McCarthy believes they will both face consequences.

“We will see an indictment,” he said of McCabe, who is facing the prospect of federal charges after Horowitz faulted him in a separate inquiry over statements he made during a Hillary Clinton-related investigation. The review found that McCabe “lacked candor” when talking with investigators, but the former FBI official has denied wrongdoing. Washington, D.C., U.S. Attorney Jessie Liu recommended charges against McCabe after the DOJ rejected his appeal, as per Fox News.

“Here’s the number two at the FBI, who’s going after individuals trying to prosecute them, believing that they have lied– he’s lying himself. When law enforcement does not uphold the law and tries to put their thumb on the scale, that to me, is where you really have to stand for accountability,” McCarthy said. (Continued Below)

Horowitz released a scathing report that revealed how Comey improperly handled “memo’s” of his conversations with President Trump and leaked sensitive information about the investigation of former National Security Adviser Michael Flynn. While the report found that Comey violated department policy, the DOJ did not press charges.

McCarthy, however, believes justice will be served for the former FBI Director. “In the end, I do not believe that Jim Comey will get off,” McCarthy predicted, adding, “Anyone that has had any association with trying to create this coup should be held accountable.” [Emphasized].

.@MariaBartiromo Says both sides should be out raged over this.@GOPLeader says just go back to the text messages that said “don’t worry we have a insurance policy for that“. Now we’re finding out what that insurance policy was. pic.twitter.com/p395oQhRah

Maria Bartiromo stressed the importance of what McCarthy said: “We came the closest ever to this country having a coup and now we need accountability.”

Today @SundayFutures @FoxNews @GOPLeader – "it was the closest thing to a coup that anyone has ever seen" re: the way peter stroyk, John Brennan & Andrew McCabe among others tried to frame @POTUS @realDonaldTrump pic.twitter.com/ppDvrxVb15

(Related: Rep. Devin Nunes Reveals Why James Comey Could Still Face Charges: ‘He Was Involved In A Conspiracy’)