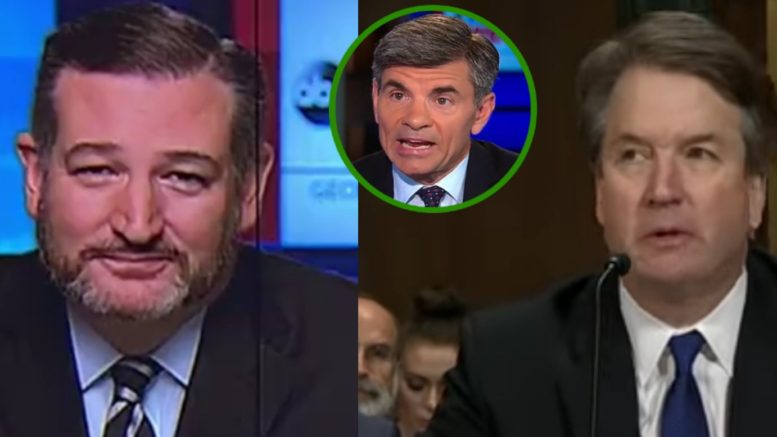 New York Times authors wrote an opinion piece that claimed they found new corroboration for accusations that Kavanaugh exposed himself to his former Yale classmate Deborah Ramirez, a classmate at Yale that hadn’t yet been investigated by the FBI.

While details surrounding the report remain unclear and unverified, ABC’s Stephanopoulos couldn’t help but ask Senator Cruz about what he thought of the report as it claims there was not an “adequate investigation” by the FBI.

Related Article: Rep. Gaetz & Geraldo Expose What Nadler’s Kavanaugh Probe Is Really All About: ‘He Wanted To Be Famous’

Cruz responded by bringing up the Senate Judiciary Committee’s investigation into Dr. Ford and how the whole chain of events that occurred during that time period was a political “circus.”

He said the committee listened to Dr. Ford, as did the FBI, but there were no corroborating witnesses to her story. Video Below

“And you know what, I betcha the next Democrat debate, they’ll all be saying ‘Impeach Kavanaugh. Impeach Trump.’ There’s nobody they don’t wanna impeach,” he declared.

“And at some point, they just have to let the anger go and realize that the democratic process actually moves on,” Cruz concluded. Video Below

Sen. Ted Cruz: "I bet you the next Democratic debate they'll all be saying impeach Kavanaugh, impeach Trump. There's nobody they don't want to impeach … they just have to let the anger go and recognize that the Democratic process actually moves on" https://t.co/gxl9RihwwF pic.twitter.com/qpFST4vQgL