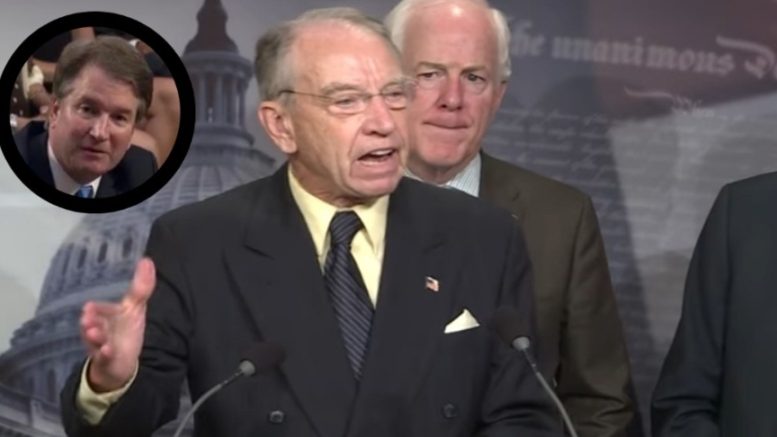 On Sunday, Senator Chuck Grassley responded to the latest opinion piece from The New York Times that claims there are new corroborations to to Debrah Ramirez’s allegation that Supreme Court Justice Brett Kavanaugh exposed himself when he was a student at Yale.

The report suggests that Ramirez’s case was not looked into deep enough by law enforcement or the Senate Judiciary Committee, which is now igniting calls from the left for Kavanaugh to be impeached without all of the facts of the story being verified.

Senator Chuck Grassley, who was Senate Judiciary Committee chairman at the time of Kavanaugh’s nomination hearing, responded to The New York Times’ article with a five-point smackdown on Twitter. Grassley said:

“@NYTimes did not [contact] Sen. Grassley’s office for this story. If they had, we would’ve reminded them of a few key public facts they omitted:

“2. Despite 7 attempts by staff, Ms. Ramirez’ lawyers declined to provide documentary evidence referenced in the article/witness accounts to support the claims. They also declined invitations for Ms. Ramirez to speak with committee investigators or to provide a written statement.

“3. Nonetheless, our investigators spoke to and reviewed material from several Yale classmates of Ms. Ramirez and Justice Kavanaugh in order to assess the claim. You can read the committee’s 414-page investigative summary here:http://bit.ly/30nwLKG

“4. The committee’s review found no verifiable evidence to support the claims. The [New York Times] own reporting at the time noted that it couldn’t find anyone with firsthand knowledge & that Ms. Ramirez told friends she couldn’t be sure Kavanaugh was involved: https://nyti.ms/2puvYrc

Grassley then capped off his statement with a video of then Senator Joe Biden during Clarence Thomas’s nomination hearing, where he said the FBI “do not reach conclusions” when investigating cases of sexual misconduct.

We leave you with that video.

Related Article: Ted Cruz Responds To Reports Of A Resurfaced Kavanaugh Accuser: ‘At Some Point They Just Have To Let The Anger Go’