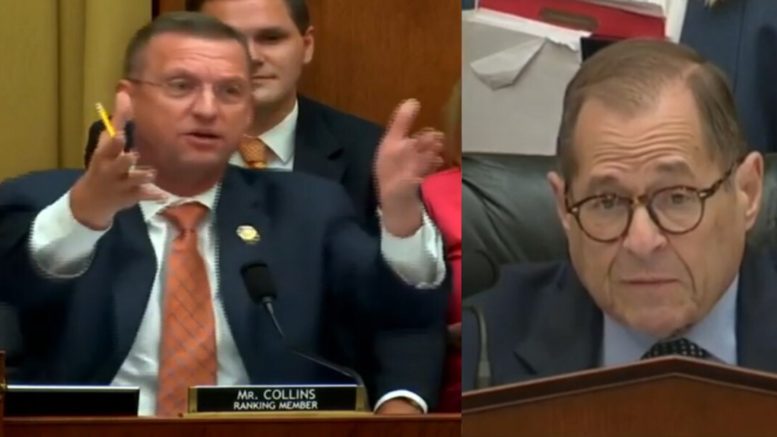 Collins slammed Nadler for his “new rules”, however, there are actually no new rules as the Georgia Congressman revealed but added that Nadler it making it seem as if there are.

“We are going to say that they are new because we like the packaging. I’ve never seen a majority so amazed with packaging in all my life! You know why? Because they can’t tell what’s inside. They can’t sell the product! So they just keep packaging it differently,” Rep Collins declared of Nadler’s continued impeachment effort.

“We should call it for what it is,” Collins continued. “It’s just another simple oversight hearing. I think it’s actually become this. It has become, ‘let’s read the Mueller report for audiobook.’ That’s what we’ve become. We had Mr. Mueller here. We had a long day of it. Judging by all accounts, it didn’t go real well.”

“Here’s the problem: 17 of the members of the Judiciary Committee have said they think the President ought to be impeached. So why are we still investigating it? 17, you get some more? The problem is, you don’t have the votes! You don’t have the numbers even if you get it outta this committee, you don’t have it on the floor. That’s your problem!” Collins expressed.

He explained that the committee is gonna drag it on to talk about the same thing over and over but put “filters up” to make it portray as something other than what it really is. “We’re gonna try to imply why this President shouldn’t be President,” he said. (Continued Below)

Collins slammed Nadler for not focusing on real issues next adding that he won’t because, “You like this! You like having the press here. You like cameras. Because it makes it appear that something’s happening and it’s not. But the real thing that is coming out and America people are starting to get it… they’re starting to get that if you’re just howling at the wind, you’re not doing anything. You’re making them think you are, but you’re not.”

He also pointed out that everyone keeps talking about “foreign influence” in the election and asked, “Where’s the bill? Where’s Waldo? Where’s the bill? We don’t do anything about it! We like to talk about it because we think it makes the President look bad. That’s the implication that we’ve been giving for two years.” (Continued Below)

Collins also said the committee doesn’t really want information. “If we did, we’d work like the intel committee had done… actually work with witnesses to come in. Mr. Lewandowski said he’d come without a subpoena, but yet, we subpoenaed him anyway. As we were told earlier this year from the Chairman’s perspective, a subpoena is the start of a dialog. Not according to [the] dictionary, but who cares,” he expressed.

He also noted that the committee doesn’t want to interview Don McGhan behind closed doors, but rather “in front of everybody”, adding that they “Want to do this out front. They don’t try to actually get information. That’s what real oversight is. Real oversight is trying to get information, but we don’t do that.”

“I understand it’s tough making a promise and not keeping it. I understand. All of us in this room can relate to a time when we made a promise and we couldn’t keep it. My majority made a promise: ‘We’ll impeach him! We’ll investigate him.’ For most of them, it happened in 2016, because they couldn’t believe that Donald Trump won! And they still can’t get over it today,” Collins expressed.