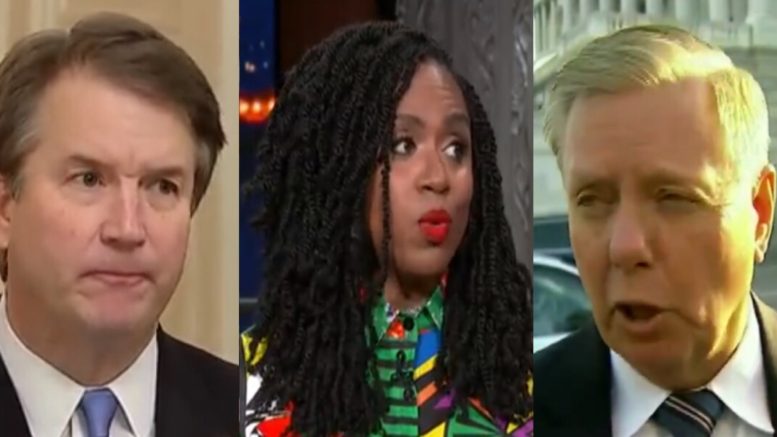 Rep. Ayanna Pressley (D-MA) one of the four freshman congresswomen in the “Squad,” is planning to introduce a resolution on “impeachment” for Supreme Court Associate Justice Brett Kavanaugh, after a so-called “new allegation” of sexual misconduct surfaced against Kavanaugh from The New York Times.

However, an editors’ note later revealed that the alleged victim did not recall it taking place. In a statement, Pressley only focused on the women who came forward during Kavanaugh’s confirmation process.

“I believe Christine Blasey Ford. I believe Deborah Ramirez,” Pressley said in a statement shared by Boston.com reporter Nik DeCosta-Klipa, which Pressley retweeted from her official Twitter account. “It is our responsibility to collectively affirm the dignity and humanity of survivors.”

Pressley also used her personal Twitter account to retweet a post that included images of what appears to be text from the resolution. It calls for “Inquiring whether the House of Representatives should impeach Brett Michael Kavanaugh, Associate Justice for the Supreme Court of the United States of America,” and for the House Judiciary Committee to conduct depositions and take affidavits, serving subpoenas if necessary, as reported by Fox News.

Senator Lindsey Graham (R-SC) responded to the accusations of The New York Times “botched Kavanaugh story” and also tweeted, “If Nadler isn’t willing to go there……..NO ONE should go there!” (Continued Below)

Several Democratic presidential candidates, however, said that Kavanaugh should be impeached and did not back down after the editors’ note and revision to the story. Sens. Kamala Harris, D-Calif.; Elizabeth Warren, D-Mass.; Cory Booker, D-N.J.; South Bend, Ind. Mayor Pete Buttigieg; former Rep. Beto O’Rourke, D-Texas, and former Housing and Urban Development Secretary Julian Castro all called for impeachment after the initial Times report, per Fox News.

“They continue to try to destroy Judge Kavanaugh’s life. The accusation is ridiculous. The New York Times writes and verifies later. The Democrat candidates for president are trying, I guess, to take political advantage somehow, it must be an advantage in their world to call for impeachment based on an article that’s false,” Graham said.

“I think it just reinforces the low points that we’ve gotten. It’s gonna backfire, it’s gonna blow up in their face, I hope,” he added. [Emphasized.] (Video Below)

They continue to try to destroy Judge Kavanaugh’s life. …It’s going to backfire, blow up in their face I hope. pic.twitter.com/H4gGgluy25

Statement from Pressley, who has made addressing sexual violence a core focus from the start of her career:

"I believe Christine Blasey Ford. I believe Deborah Ramirez. It is our responsibility to collectively affirm the dignity and humanity of survivors."

Griff Jenkins reports on the growing divide between Democrats on taking up the issue:

If Nadler isn’t willing to go there……..NO ONE should go there!