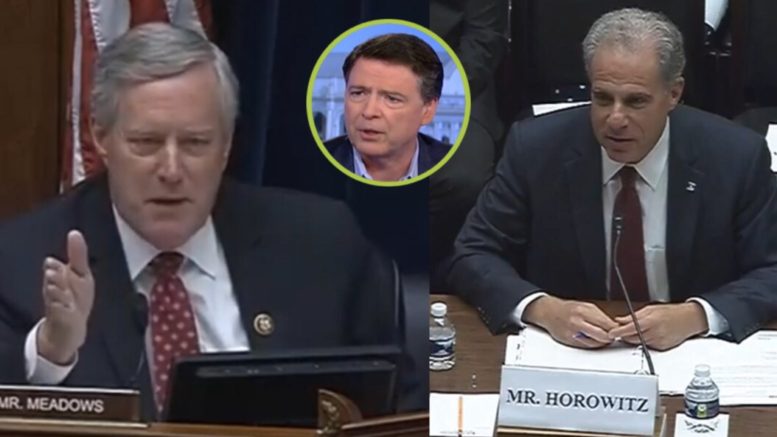 On Tuesday, the House Oversight Government Operations subcommittee held a hearing on “Overseeing the Overseers: Council of the Inspectors General on Integrity and Efficiency @ 10 Years.”

During the hearing, Rep. Mark Meadows (R-NC) questioned Inspector General Michael Horowitz about his report pertaining to former FBI Director James Comey and revealed that he will be sending referrals that shows “several inconsistencies” with the IG report and congressional testimonies that don’t match up.

Rep. Mark Meadows asked Horowitz, “If the IG community at the DOJ shared information with the media the way that you found and reported in your findings, would that undermind the overall objective, in terms of sharing information with media?”

“If anyone of my staff did that, there would be serious consequences [be]cause it would have a significant effect on our work,” Horowitz responded.

Meadows: “Wouldn’t you draw the same conclusion that sharing information under ongoing investigations within the DOJ and FBI is not a practice that we should actually embrace?” Horowitz replied, “Absolutely.”

Meadows: “Did you find that in some of your inspector general’s report on what has already been published with relationship to Director James Comey?” Horowitz said, “We did.” (Continued Below)

“We haven’t in that report, the one instance where it occurred through Mr. Richman to the press,” Horowitz said.

“Once you have a report that is out, once we read the report… do you go back and look at congressional testimony to correlate between what you were told under oath by witnesses versus testimony that has been given to Congress to make sure those two come together?” Meadows asked of Horowitz. (Continued Below)

“If we’re aware of it and it relates directly to it, yes. But obviously, we’re not up to date on all of the different testimonies. So generally, we rely on the referrals,” Horowitz explained.

“Right, so that’s where I’m kind of going to this because we’ve taken now your report and we’ve put it side by side– a congressional testimony that James Comey made before the joint oversight and judiciary hearing. And I’m finding a number of irregularities. Would it be appropriate if Ranking member Jordan and I were to refer those inconsistencies to the IG? And if we did that, would the IG look at those inconsistencies?” Meadows asked.

“It’s certainly appropriate for us to get a referral about a then employee of the Department, which I think the hearing you’re probably referencing, and then we assess it. And as you indicated before, we would make an independent assessment of whether it’s appropriate,” Horowitz said.

Meadows gave an example: “Mr. Gowdy was asking you ‘Did initiate an obstruction of justice investigation based on what the President said?’ It was a very clear question. Comey said, ‘I don’t think so, I don’t recall doing that.’ So, I don’t think so. However, on page 13 of your IG’s report, it says that Comey purposely leaked the memos so that they could have a special counsel appointed to investigate obstruction of justice.”

“So, two of those cannot be true. They’re at opposite dynamics in terms of what they’re constructing. And, we have dozens of examples where that has happened. Is that something that would be important for the American people to know and for you to look into?” Meadows asked. (Continued Below)

“I guess I would say as, in any situation, we would want to get the referrals, [and] the testimony so we could make a decision,” Horowitz said.

“We’ll be making those referrals to you today, Mr. Horowitz. And I think that it’s important that the American people get to look at this, Meadows revealed. [Emphasized].

Meadows also tweeted on Wednesday after Corey Lewandowski testified on Tuesday, “You really can’t say it enough: we had a 2 year long, unlimited investigation from a special counsel that came up empty—and now we’re nearly 10 months in to a new Congress and Democrats are STILL aimlessly investigating the same thing.”

You really can't say it enough: we had a 2 year long, unlimited investigation from a special counsel that came up empty—and now we're nearly 10 months in to a new Congress and Democrats are STILL aimlessly investigating the same thing.