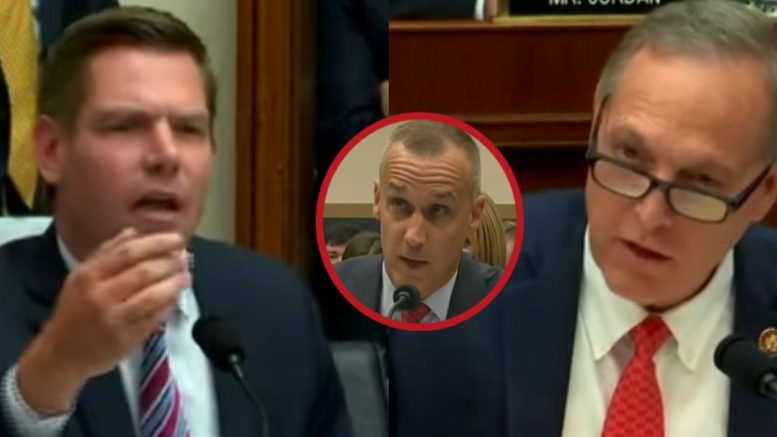 Democrat Congressman Eric Swalwell has not given up on his theory that President Trump is a “Russian agent,” which he was caught admitting during Cory Lewandowski’s hearing.

While Republican Rep. Andy Biggs got his turn to grill Lewandowski, Biggs pointed out how Democrats on the committee unleashed several slanders directed at Lewandowski, which he said is “unfortunate.”

Biggs went on to mention that despite being called a liar and labeled as uncooperative, Lewandowski has provided hours of testimony with law enforcement investigators as well as Congressional committees.

“Let’s talk a little bit more about what some members of Congress have done,” Biggs said. “They’ve spent two years claiming, without evidence, that then-candidate Trump and the Trump campaign colluded with Russia.”

Lewandowski responded that while he ran Trump’s campaign, he does not believe he had any interactions with foreign governments that he thought were trying to change the outcome of the 2016 election. And if anyone did knowingly cooperate in such a conspiracy, they should “spend the rest of their lives in jail.” Video Below

Biggs then brought up how on Chris Matthews’ show in January of 2019, one of the members of the committee was asked if he believes President Trump was an “agent of Russians”. Rep. Eric Swalwell piped up and said, “That was me.”

Biggs continued: “That member said ‘Yes.’ Chris Matthews followed up and said, ‘An agent like in the 1940s working for a foreign power?’ That individual responded, ‘That person is working on behalf of the Russians, yes.'”

Swalwell piped up again and blurted out, “Still believe that.” Video Below

Related Article: Swalwell Reveals His ‘Evidence’ To Back Up Why He Thinks Trump Is A Russian Agent: ‘I Think He Acts On Russia’s Behalf’