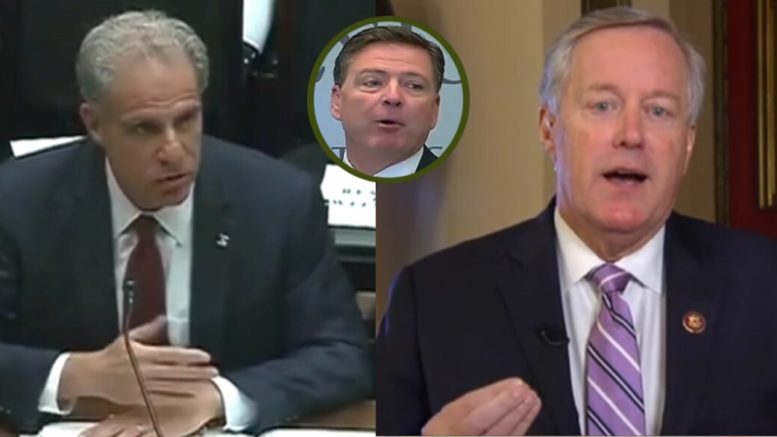 On Wednesday, Swamp Drain reported that Rep. Mark Meadows (R-NC) questioned Inspector General Michael Horowitz about his report pertaining to former FBI Director James Comey, and he revealed that he will be sending referrals to the DOJ watchdog that shows “several inconsistencies” with the IG report and congressional testimonies that don’t match up.

“We’ll be making those referrals to you today, Mr. Horowitz. And I think that it’s important that the American people get to look at this,” Meadows told the Inspector General during a House Oversight Government Operations subcommittee.

On Thursday, Rep. Meadows spoke with Fox News’ Bill Hemmer and Sandra Smith on “America’s Newsroom” where he discussed some of the “inconsistencies” by James Comey and revealed why the former FBI Director’s “problems are just now starting.”

He noted that he has identified “multiple” occasions where he has found that has happened. “We’re referring those to the Inspector General to actually investigate, and that’s what was the genesis of all of this yesterday.”

“James Comey’s problems are just now starting!” Meadows declared. “We’ve seen enough documents; we know the IG’s report is coming out. And listen, the only thing that’s been consistent about Director James Comey is his willingness to go after this President. And it’s time that we hold him accountable.” [Emphasized]. (Continued Below)

Meadows listed an example of an “irregularity” that he found between the IG report and congressional testimonies: “One of the irregularities is that James Comey actually said that ‘nothing that happened actually effected the investigation.’ And then, we see in the Inspector General’s report, that some of the conversations that he had, actually changed the action that he took, specifically trying to leak things to get the special prosecutor installed and called into action.”

“There are a number of others where he said, ‘Well, I’m only taking these memos, these notes for my own personal use’, and yet, what we see from the Inspector General’s point of view, it was actually a calculated plan that he discussed with senior-level officials to try to, in my opinion, entrap the President of the United States,” Meadows explained.

Asked if he believes Comey was lying, Meadows said, “I believe at times he was not telling the whole truth to congressional investigators, even within the context of what he told Republicans versus what he told Democrats. There was a different story. We know that from his television appearances. This is the first time we have seen inconsistencies where he told one thing to Congress, another to the Inspector General, and those not matching up. Both of those have a requirement to tell the truth, the whole truth, and nothing but the truth.” (Continued Below)

Asked what he was suggesting by accountability or what could result from the referral to Horowitz, Meadows clarified: “This could only be the beginning for James Comey. I don’t know if it’s our referring to Horowitz on this, because I know he’s going to look at this. He admitted that he had not looked at all the congressional testimony[s] and transcribed interviews when he made his criminal referral before.”

“But what I’m referring to really is the documents that we’ve given to the Inspector General as it relates to the FISA abuse. Not only was there credibility issues with Christopher Steele’s, but there was a lack of candor and transparency as it related to some of the briefings that they held President-elect Trump and then, President Trump. It’s more of a matter of what they didn’t tell, versus what they did tell and then, what we have found,” Meadows continued.

“It’s those kinds of inconsistencies that there may be a good explanation, but I’ve yet to find one,” the North Carolina Congressman stated. (Video Below)

On Wednesday, Swamp Drain reported that Rep. Jim Jordan discovered that neither Chairmen Elijah Cummings (D-MD) or Jerry Nadler (D-NY) have inquired about holding a hearing on the Inspector General’s findings.

Meadows also tweeted on Thursday, “Remember: James Comey has repeatedly said he held the Jan. 2017 dossier meeting with Trump to simply “give Trump a heads up” RE: the dossier BUT: per the IG report, witnesses say Comey was actually using that same Trump briefing to collect info for a Russia probe.”

“This is the type of inconsistency that suggests FBI/DOJ leaders at the time were saying one thing and doing another—not being up front with the public or the President, and targeting Trump along the way. We will get to the bottom of it,” he added.

This is the type of inconsistency that suggests FBI/DOJ leaders at the time were saying one thing and doing another—not being up front with the public or the President, and targeting Trump along the way.

We will get to the bottom of it. https://t.co/jjeDPg5D0M

(Related: Gaetz Blasts Dems For Having Lewandowski Testify: ‘Jim Comey Should Be Sitting In That Chair’)