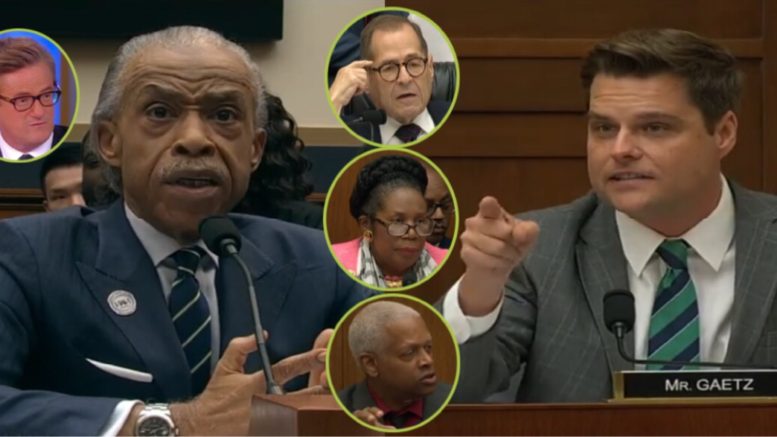 During a House Judiciary Committee hearing on police brutality, things spiraled into chaos Thursday and got heated when Rep. Matt Gaetz grilled Reverend Al Sharpton about past statements about Jews, white people, and African Americans that are considered bigoted and racially charged.

Gaetz cited a resolution authored by former Rep. Joe Scarborough (R-FL), from several years ago, before Scarborough and Sharpton became MSNBC colleagues. The exchange became heated and several democrats on the committee tried to defend Sharpton, as they called for points of order throughout Gaetz’s time of questioning the witness.

Rep. Gaetz grilled Sharpton over his MSNCB’s colleague’s blistering rebuke of Sharpton’s past comments, as cited in the resolution, but things quickly went off the rails. (Continued Below)

“They are patently untrue. I never said that,” Sharpton claimed of the assertions, adding that he and Scarborough are now close and appear together on MSNBC.

“Have you ever referred to members of the Jewish faith as ‘white interlopers’ or ‘diamond merchants’?” Gaetz asked.

Democrats rushed to Sharpton’s defense and accused Gaetz of badgering the witness with inappropriate questions not germane to the hearing on policing. “This is an outrage!” declared Rep. Sheila Jackson-Lee (D-TX). (Continued Below)

Judiciary Committee ​Chairman ​Jerrold Nadler (D-NY), however, pounded his gavel several times to restore order in the committee but said he can’t object to the “obnoxious” questioning because members of ​Congress are afforded “wide latitude” on how they use their allotted time.

“Do you think that your bigoted statements in 1991 are excusable just because they were in 1991?” Gaetz asked of Sharpton.

“I think that any statement that I’ve made that was wrong. I have clearly said that we should not make bigoted statements, including me,” Sharpton said.

*Note: this video is of two separate exchanges during the hearing edited together by CSPAN.