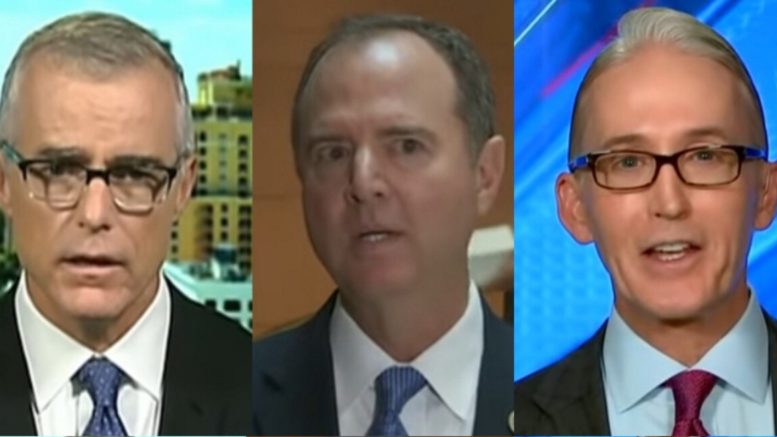 The Washington Post reported that a U.S. intelligence official filed the formal complaint in regard to Trump’s communications with the unnamed foreign leader. Acting Director of National Intelligence Joseph Maguire would not share details of it with lawmakers, as reported by Fox News.

In an interview with CNN, contributor Andrew McCabe said, “This is someone who essentially did what we hope all people serving in the government will do. They stepped forward, they used the appropriate process in a classified and confidential matter to bring their concerns to the appropriate officials. That takes incredible ‘courage’. It is hard to stand up to an administration– to stand up particularly to this administration and this President.”

“I doubt Andy McCabe has any idea what the content of that phone call was or how courageous the whistleblower is. Not having access to the facts is never has never stopped Andy McCabe from expressing an opinion in the past,” Gowdy said.

Adam Schiff has also voiced his concerns about not having access to the information and warned that Congress could use legal action or budgetary powers as leverage to force the White House to open up about the complaint. (Continued Below)

“This is what I do know: I warned people weeks ago that if Adam Schiff continued to be the Chairperson of the House Intelligence Committee, who’s one of the most ‘deeply partisan’ members of the House, eventually people would stop sharing information with the Intelligence Committee, and apparently, that’s what’s happened,” Gowdy said, reiterating comments he made in a March interview, after the intel committee demanded that Schiff step down as chairman.

During a press conference in March, Pelosi told reporters, “I’m so proud of the work of Chairman Adam Schiff,” as she stood by the California Congressman following calls for his resignation. “If Nancy Pelosi wants this information given to Congress, she should pick a ‘less partisan’ person to be the Chairperson of that committee,” Gowdy suggested on Friday. (Continued Below)

“When you put someone who is wrong as often as Adam Schiff is wrong and is as deeply partisan as he is, in charge of the Intelligence Committee, then no, you’re not going to share confidential information, because ‘Adam leaks like a sieve!‘” Gowdy declared. [Emphasized].

“That’s the consequence of putting someone that partisan as the head of the intel committee,” he added of Schiff.

Gowdy said he doesn’t know the facts about the whistleblower allegations and the country’s “political culture” needs to come to a point where people do not speculate about such matters for partisan gain. But he also sees some hypocrisy in the swift outrage in response to the allegations against President Trump. (Video Below)

“What does frustrate people is I seem to recall a president who said ‘I’ll have more flexibility in a second term,'” Gowdy said. “We don’t have to worry about that. That’s on tape. I don’t think there was a similar level of outrage when President Obama promised that to the Russian President as there is now. We don’t have any idea what President Trump said.”