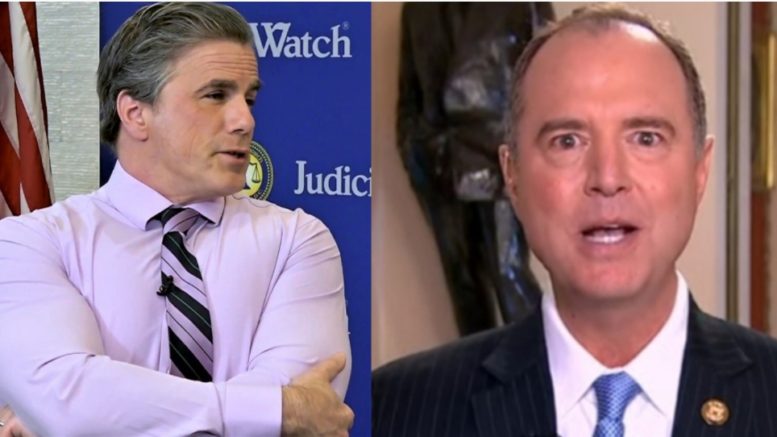 According to Fitton, Schiff should be “kicked off” the Intel Committee due to “irregular” instances of his recent past. But since that likely won’t happen, Fitton thinks President Trump may have to take matters into his own hands.

In a Friday tweet, Fitton said, “Schiff should be kicked off Intel Committee–he lied about @RealDonaldTrump and Russia.”

“Also [Schiff] has serious ethics problems over mishandling of classified info and irregular communications with [email protected] witnesses,” he added.

Fitton went on to cite a past complaint made by Judicial Watch, where they made mention of Schiff’s meeting in Aspen, CO with Glenn Simpson, founder of the firm Fusion GPS that created the infamous Steele Dossier. The complaint also referenced how the staff of Adam Schiff traveled to New York at least four times to meet with President Trump’s former attorney Michael Cohen for over 10 hours immediately before his public testimony.

This combined with Schiff’s alleged leaks and his duped two-year Russia collusion accusation indicates a high level of bias towards President Trump. And his intentions with the whistleblower drama should be very concerning for the President. Video Below

On Saturday morning, Fitton followed up on his initial statement made on Friday, and demanded that President Trump take action to ensure Schiff gets limited access to classified info as long as he is chairman.

“Mr. Schiff can’t be trusted with classified info. @realDonaldTrump should order his agencies to cease any cooperation with House Intelligence Committee as long as Schiff is Chairman,” Fitton demanded. See Below

Mr. Schiff can't be trusted with classified info. @realDonaldTrump should order his agencies to cease any cooperation with House Intelligence Committee as long as Schiff is Chairman. https://t.co/XDD4oOHo0x

In ending, here is video of Fitton discussing the repeated lies made by Adam Schiff: