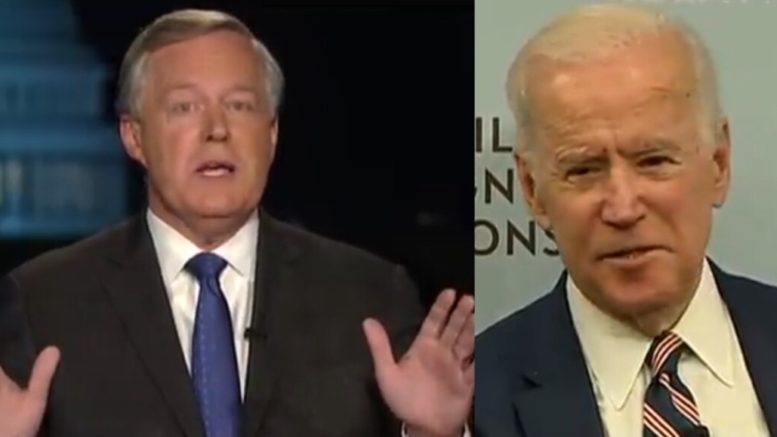 Rep. Mark Meadows (R-NC) spoke with host Judge Jeanine Pirro Saturday on Fox News‘ “Justice,” where he slapped down allegations from the reported whistleblower, who claimed President Trump used the power of his office to pressure the Ukrainian government to investigate Hunter Biden, the son of former Vice President Joe Biden.

Meadows said he has been following the story since May and described it as a hoax along with calling the whistleblower illegitimate.

“Okay, Congressman, so the issue seems to be that Biden pressured Ukrainian officials to fire the prosecutor investigating his son, Hunter’s business in the Ukraine, where it’s estimated he made millions in a business with which he had no expertise or training,” Pirro explained.

She continued, “So when he is asked and the initial part of that sound, you know, whether or not he talked to his son about doing business in the Ukraine? The answer is no. His own son answered in a “New Yorker” piece, and I think we have a full screen of it, and he said that he had spoken to his father, as Hunter recalled, his father discussed Burisma, which was that company with him just once. “Dad said, ‘I hope you know what you’re doing.’ And I said, I do.”

“So right on its face, Joe Biden either didn’t recollect or intentionally misled or lied by saying he never spoke to his son about the Ukraine and the business there. But more significant, the interview where Joe Biden kind of takes a victory lap and says, ‘hey, look, I got the prosecutor fired, because I was withholding billions from Ukraine.’ What’s your take on that?” she asked Rep. Meadows.

“Well, my take on that is exactly the kind of thing that they’ve been accusing President Trump of all along. Can you imagine if the prosecutor in Ukraine, if his name was Bob Mueller, what would have happened? Oh, my gosh, I mean, everything would have gone– I want to talk about Ukraine,” Meadows said. (Continued Below)

“You know, the Democrats have really walked into it because I can tell you, that the investigation with regards to Joe Biden’s son, and also the investigation in terms of other D.N.C. operatives working in the Ukraine, happened months ago. We’ve been following this. I’ve been working on this since back in May. So I can tell you, this is just not a Russian hoax. This is a Ukrainian hoax, and it’s not even by a legitimate whistleblower,” Meadows explained. [Emphasized].

“I mean, there’s been reports, Judge out there that actually the whistleblower didn’t learn about any of this on the job. Actually, it was hearsay. And so, when you start to look at the bottom line of all of this is, one, it does need to be investigated. And so I’m calling on my Democratic colleagues, let’s look at it. And I think at the end of the day, Joe Biden will be the one that is left with egg on his face,” he added. [Emphasized].

CNN reported last week, “The whistleblower didn’t have direct knowledge of the communications, an official briefed on the matter told CNN. Instead, the whistleblower’s concerns came in part from learning information that was not obtained during the course of their work, and those details have played a role in the administration’s determination that the complaint didn’t fit the reporting requirements under the intelligence whistleblower law, the official said.” (Continued Below)

Meadows also noted that President Trump “certainly has the right” to ask whether or not Joe Biden leveraged American money to stop the Ukrainian investigation. “As long as he doesn’t do what Joe Biden did, which says we’re going to hold some money unless you have a particular type of action,” he said.

“You know, listen, there have been rumors about this before for a long time, obviously, Joe Biden is even bragging about the fact that he used leverage on American taxpayer dollars. But more importantly than that, when we start to see the connection with Ukraine, and what we have now is a new government in Ukraine. So all of a sudden, the protections are falling apart. The President is right to ask about it,” Meadows explained. “And I believe, in fact, I have a strong belief and informed belief that indeed, nothing inappropriate happened,” he said.

“And I can tell you here tonight, that what we’re going to do is get to the bottom of it. You know, there’s another person, Judge and I know that perhaps we’re not prepared to go here. But there was also a D.N.C. operative, Miss Chalupa that was paid in 2016 dollars to work with Ukraine. And you know what they said that she was doing, working on a women’s outreach in Ukraine. Well, maybe that’s why Hillary Clinton lost Wisconsin and lost Pennsylvania [be]cause they were working on women’s outreach in a foreign country,” Meadows suggested.

“This is eerily like Russia when they want to accuse the President and they are starting to do that –of doing something wrong with the Ukraine, it’s like a boomerang. It comes back and it hits them… I mean, this is dirty, dirty, dirty. And in the end, I believe that when everything comes up, you know that if Biden did play a central role in the energy policy in the Ukraine, and he is not going to try to turn this around on Donald Trump, that’s the biggest mistake of his life right now,” Pirro said.

Meadows responded, “I don’t want to falsely accuse anybody of improper behavior. But what we do know is Adam Schiff, and a lot of his Democratic colleagues continue to spin a narrative over and over again, of which they’re guilty of. You know, they’ll accuse the President of colluding with Russia. Well, the only people that actually worked with the Russians was the D.N.C. and the Clinton campaign, which did it.” (Video Below)

“I would think at the end of the day, the only people that actually worked with the Ukrainians is that same group, the Democrats and the Hillary Clinton campaign, and I think you’ll see that, so I welcome us looking at it. Hopefully, Adam Schiff and I can bring in and subpoena some people to really get to the bottom of this because, at the end of the day, it will not be pretty for them,” Meadows said.

“You know, they’re trying to throw every accusation at the President and his team as much as they possibly can because they really have nothing. And they think if they keep going one after another after another, that eventually the American people will side with them. The exact opposite is happening. The exact opposite is happening,” he concluded.