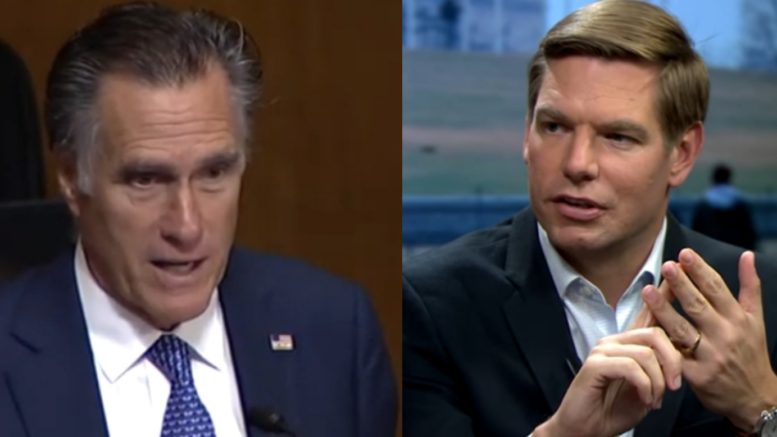 Anti-Trump Democrats, including Adam Schiff and Eric Swalwell, have been literally drooling over the prospects that there might be info of some sort that can be used against President Trump in regards to an alleged DC “whistleblower.”

If it hasn’t already been cringe-worthy to see how some Democrats have handled the situation thus far, Republican Senator Mitt Romney released a statement on Sunday that perfectly falls in line with the left’s anti-Trump narrative.

Romney said in a tweet, “If the President asked or pressured Ukraine’s president to investigate his political rival, either directly or through his personal attorney, it would be troubling in the extreme.”

“Critical for the facts to come out,” Romney proclaimed.

Upon seeing Mitt’s tweet, Rep. Swalwell perked up and tried to persuade Senator Romney to take some initiative for the sake of all anti-Trumpers in Washington.

“We need you, Senator. Now, find friends to co-sign this,” Swalwell urged. See Below

We need you, Senator. Now, find friends to co-sign this. https://t.co/FLZBjoAvao

Swalwell, Romney and others are basing their thoughts and actions primarily on the unverified reports from mainstream sources, which suggested that a “whistleblower” has indirect knowledge that President Trump pressured Ukraine’s President at least 8 times to investigate potential corruption by Joe Biden while he was Vice President.

Right after the speculation surfaced, Democrats immediately accused Trump of election interference, demanded an investigation and all related documents to be released.

On Sunday, however, Ukrainian leadership denied mainstream reports and crushed Democrats’ narrative when they said President Trump did not pressure President Zelenskiy.

We leave you with President Trump’s tweet in regards to the latest revelations:

..Breaking News: The Ukrainian Government just said they weren’t pressured at all during the “nice” call. Sleepy Joe Biden, on the other hand, forced a tough prosecutor out from investigating his son’s company by threat of not giving big dollars to Ukraine. That’s the real story!