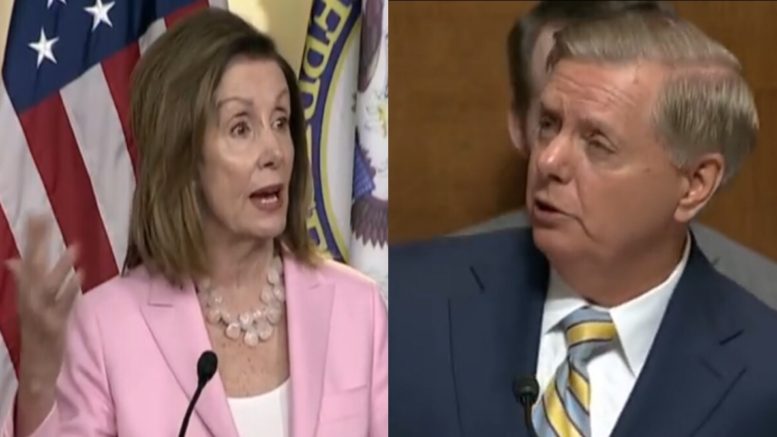 This comes after an alleged phone conversation with President Trump and Ukraine’s President Volodymyr Zelenskiy, involving former vice president Joe Biden that, if proven to be true, could put a major dent in Biden’s campaign. The phone call, however, prompted a mysterious whistleblower to file a complaint with the ICIG (Office of the Intelligence Community Inspector General).

Ocasio-Cortez on Saturday night kickstarted a dormant, but long-simmering and occasionally explosive feud with top House Democrats in the form of a fiery tweet: “At this point, the bigger national scandal isn’t the president’s lawbreaking behavior – it is the Democratic Party’s refusal to impeach him for it, as reported by Fox News.

The Democrat House Speaker has long resisted calls to impeach President Trump, but with pressure from within her party, Pelosi specifically said that a whistleblower who reportedly alleged that Trump acted improperly during a July 25 phone call with the Ukrainian President must be allowed to speak to Congress, and the full whistleblower complaint must be provided.

But if Democrats’ demands were not met, Pelosi said, the Trump administration’s “grave new chapter of lawlessness” would necessitate drastic action. “We must be sure that the President and his Administration are always conducting our national security and foreign policy in the best interest of the American people, not the President’s personal or political interest,” Pelosi said, per Fox News. (Continued Below)

“This violation is about our national security,” Pelosi continued. “The Inspector General determined that the matter is ‘urgent’ and therefore we face an emergency that must be addressed immediately.”

In her statement, Pelosi said Democrats would be watching closely. “If the Administration persists in blocking this whistleblower from disclosing to Congress a serious possible breach of constitutional duties by the President, they will be entering a grave new chapter of lawlessness which will take us into a whole new stage of investigation,” Pelosi said. “Thank you for your patriotism.”

CNN, however, reported last week, “The whistleblower didn’t have direct knowledge of the communications, an official briefed on the matter told CNN. Instead, the whistleblower’s concerns came in part from learning information that was not obtained during the course of their work, and those details have played a role in the administration’s determination that the complaint didn’t fit the reporting requirements under the intelligence whistleblower law, the official said.” (Continued Below)

Inspector General Michael Atkinson of the office of the Director of National Intelligence (DNI) wrote in a Sep. 9 letter to the House Intelligence Committee that the whistleblower complaint “appeared credible” and related to an “urgent” matter. But, the DNI general counsel said days later that, after consulting with the DOJ, the matter did not meet the legal definition of an “urgent concern,” and was not subject to mandatory disclosure to Congress, as reported by Fox News.

“Furthermore, because the complaint involves confidential and potentially privileged communications by persons outside the Intelligence Community, the DNI lacks unilateral authority to transmit such materials to the intelligence committees,” Jason Klitenic, the DNI general counsel, wrote.

Acting Director of National Intelligence Joseph Maguire is expected to testify before the House Intelligence Committee at an open hearing on Thursday.

Senator Lindsey Graham responded after Speaker Pelosi suggested that impeachment may be “back on the table.”

“I don’t trust the media to do this, and I’m hoping somebody– that the Department of Justice will appoint an investigator to look at all things Ukraine, like we looked at all things Russia,” Graham said in part on Sunday.

At this point, the bigger national scandal isn’t the president’s lawbreaking behavior – it is the Democratic Party’s refusal to impeach him for it.