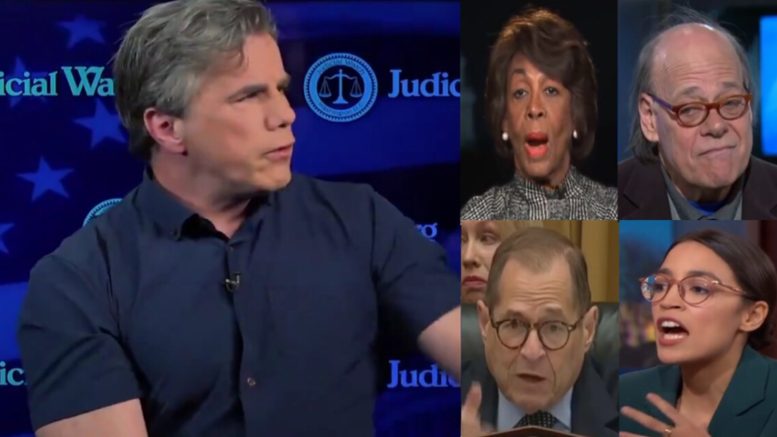 Judicial Watch is not only doing all the heavy lifting but has provided the American people with documentation, uncovering the truth behind the “swamp’s” effort to take down a duly elected President.

President of Judicial Watch, Tom Fitton, took to Twitter on Sunday where he explained how Democrats’ effort to impeach President Trump is really a “coup”.

“Whenever you hear the word ‘impeachment’, I want you to substitute another word: ‘coup’, Fitton recommended.

Fitton explained why: “Because an impeach that has no valid basis, that’s being pursued in bad faith, is an attack on our Constitutional Republic.”

He pointed out that during a segment with Fox Businesses’ Lou Dobbs, that Sen. Mitch McConnell (R-KY), should say, “We’re not doing an impeachment trial. So don’t start playing games over there in the House, because it’s not going anywhere.”

The Judicial Watch president clarified, “If there was a valid ‘impeachment effort’, you would all know what President Trump was going to be impeached over because it would be well [and] readily apparent.” (Continued Below)

Fitton described that the House is “flailing around, sending over a hundred subpoenas, harassing ‘Trump world’ with redundant investigations, [be]cause they’re not sure what he could be impeached over.”

(Related: Fitton Calls On Schiff To Be ‘Kicked Off Intel Committee’ & Cut Off From Intel Access Amid Whistleblower Drama)

“That’s a complete abuse!” he then declared. (Video Below)

Fitton tweeted, “Whenever you hear the word “impeachment,” I want you to substitute another word — ‘coup!'”

Whenever you hear the word "impeachment," I want you to substitute another word — "coup"! @RealDonaldTrump @JudicialWatch pic.twitter.com/QYe0xMHmde

Tom Fitton and Lou Dobbs discussed the Democrat’s impeachment effort: “The House Democratic party is out of control, in terms of pretending they are impeaching, to justify unprecedented attempts to gain access to information, that they would otherwise, would never be entitled to,” Fitton said.

“They would impeach a ‘ham sandwich’ as long as they are a Republican or a conservative,” Fitton suggested, adding, “There’s not one institution that’s under assault, seditious assault, by the hard-core left, which has now taken control of the establishment here in Washington.”

(Related: Kamala Calls On Kavanaugh To Be Impeached Because He ‘Lied’, Fitton Fires Back: ‘I Saw You Smear An Innocent Man’)