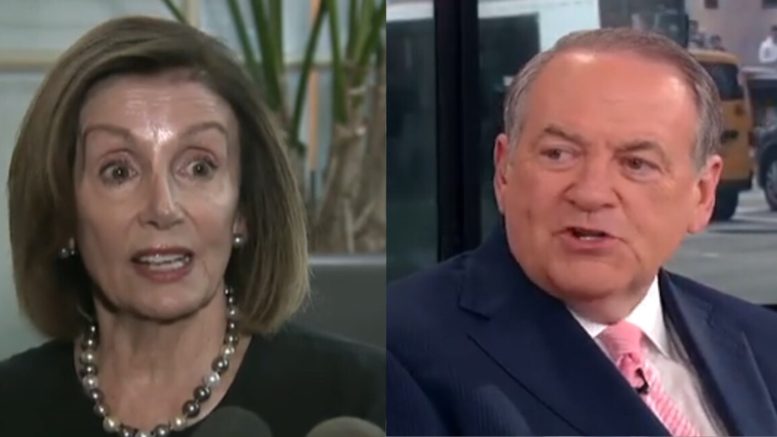 On Wednesday, former Arkansan Governor, Mike Huckabee, and Democratic strategist and DNC member, Robert Zimmerman, weighed in on Fox News’ “The Story” after the release of the transcript from President Donald Trump’s phone call with Ukrainian President Volodymyr Zelensky.

Zimmerman peddled the Democratic “talking points” during the segment, but Huckabee, however, was quick to point it out and dared Democrats to start “impeachment” against the President after Speaker Nancy Pelosi’s (D-CA) announcement on Tuesday to formally begin an “impeachment inquiry.”

Asked about Democratic presidential candidate, Joe Biden, amid the Ukraine and China scandal, Robert Zimmerman claimed that Republicans are going to “gossip about Hunter Biden and make-up facts about him.”

“The reality simply is they want to talk about Hunter Biden, Donald Trump is our President. According to the ‘memorandum’ the White House released today, was on the phone with the President of Ukraine and asking him to do him a favor, and interfere in our American election, and try to pick up dirt on his political opponents. They’re gonna talk about Hunter Biden? We’re gonna talk about the independent special counsel that got the whistleblower’s report, and came out and said that ‘this is urgent and threatens national security,'” Zimmerman said.

Zimmerman suggested that President Trump abused his power in welcoming foreign government to attack our democracy and undermining our American electoral system for his own benefit.

Mike Huckabee responded and explained that “nobody is going to enjoy this,” adding “It’s too bad the Emmys are over. Robert, we would give you an Emmy for that performance. You were very convincing. But here’s the fact that you got to look at: Donald Trump released the transcript. Why? Because there was nothing that he had to worry about. He didn’t put any pressure; there was no quid pro quo.” (Continued Below)

“Now we see Democrats in Congress are clairvoyance, because they already, in advance to the release of the transcript, decided what was in it. That was amazing! Huckabee expressed.

“And this is the same group of people, including Adam Schiff, who said, ‘We’ve got the evidence on Russia.’ Turned out he didn’t. Today he came out and said, ‘Oh, it’s worse than I ever thought’. I laughed out loud. I was in my car listening to that. I laughed out loud and I said, ‘You know, as we’re sitting here today, we’re talking and there are people all over having dinner across America, I can assure you, that only the people that hate Donald Trump are in a fraught over this.’ Most people are just rolling their eyes,” Huckabee added.

Zimmerman claimed that President Trump was holding up $400 million from Ukraine and military assistance and likened him to a mobster. “If you ever watch an episode of the Sopranos, you would know what a ‘shakedown’ is. This is nothing more than old fashioned ‘shakedown’ and gross abuse of Presidential power,” he said. (Continued Below)

During a meeting in New York with President Trump, President Zelensky told reporters Wednesday that he was not pressured to investigate the Biden family during their now-controversial phone call over the summer. “Nobody pushed me,” Zelensky said. We had a great phone call it was normal.”

Host Martha MacCallum said during the segment that Governor Huckabee is probably right about people not paying attention to this, as the polls show that they do not want President Trump impeached.

“Robert has the talking points down. Let’s just be real clear: the Democrats want to impeach Donald Trump, I say go for it. Get out there and go for it. If you think it’s a constitutional crisis and you just said you did, then you have every obligation to go impeach him. So quit talking about it and do it, just go for it,” Huckabee dared.

Asked if he insists the vote for impeachment to be taken in the House, Zimmerman replied, “Absolutely not! We have to first get our facts; first, have hearings.”

Martha MacCallum and Mike Huckabee burst out laughing after Zimmerman said he would not vote today to impeach. “Wait a minute! Why not? Pelosi stood in front of the camera and said, ‘It’s official, we’re now opening this inquiry.’ Typically, as we’ve seen in the past, that means that everybody is ready to vote on the procedure beginning for the investigation.”

Mike Huckabee also tweeted upon the release of the transcript:

I’ll release later today an unredacted transcript of phone call I had with @PapaJohns ordering a pepperoni pizza. Jerry Nadler has subpoenaed it and AOC demanded that the pepperoni be removed to save the planet. #ImpeachmentParty

More breaking wind from CNN! Pelosi issues correction and says it wasn’t a “whistleblower” after all. It was a LEAF blower and she just thought it was a whistle. So never mind. Carry on. Nothing to see here. Move along.

Adam Schiff reportedly overheard sobbing in a stall in the women's restroom at Capitol today saying "We really thought we had him this time!" This according to unnamed and anonymous sources. I'll give full report 2nite on @TheStoryFNC w/ @marthamaccallum on @FoxNews 7pm ET.