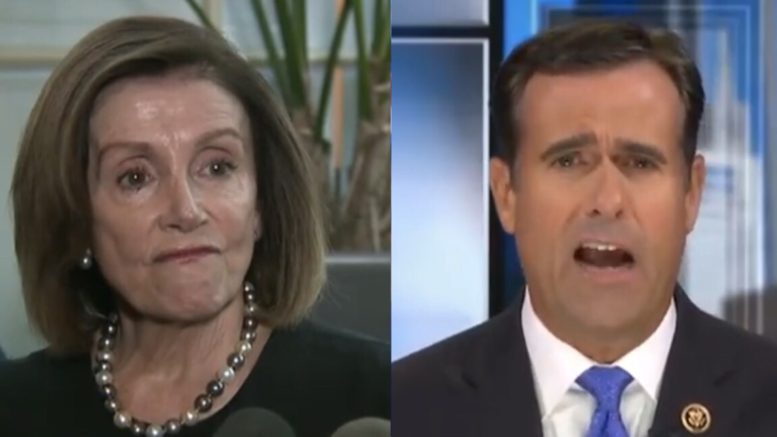 On Wednesday, Rep. John Ratcliffe (R-TX) weighed in on Fox News’ “America’s Newsroom” after the release of the transcript from President Donald Trump’s phone call with Ukrainian President Volodymyr Zelensky.

Ratcliffe said the call proves that President Trump was not trying to influence the Ukranian President to investigate former Vice President Joe Biden, rather it shows that the Democrats’ “impeachment search party came up empty” once again, with egg on their faces.

“The President knew what was on that transcript, the rest of us didn’t. We were told by the Democrats what it was going to be. Yesterday, Nancy Pelosi stood in front of the American people and said, ‘I know I talked about impeachment by collusion, … conspiracy, … by the President using a sharpie on a hurricane weather map, we had evidence of all of these crimes. But this time, I really, really, mean it. We got a transcript and we’ve got a whistleblower where the President had corrupt intent to influence the head of the Ukranian government to do something he didn’t want to do. Just wait,'” Ratcliffe said of Pelosi.

“Well, today we waited. We got the transcript and the President was telling the truth and Nancy Pelosi wasn’t. There’s no quid pro quo. The President never even mentioned military aid. There wasn’t anything but admiration from President Zelensky for President Trump. It wasn’t what the Democrats promised, and once again, their ‘impeachment search party’ came up empty,” he expressed. [Emphasized].

Ratcliffe explained that Democrats told the public that a whistleblower was going to provide all of the damning details. “The best evidence of what happened is this transcript, and look for the things the Democrats promised,” he suggested.

“I didn’t see Joe Biden’s name mentioned in there eight times. I didn’t see a ‘We’ll withhold military aid unless you do this,’” he continued. “What I heard was a conversation that should take place outside of public view between two heads of state that is in public view, because the Democrats were demanding the president conclusively prove his innocence. I think he’s done that today, but he’s done so by harming national security through what the Democrats were demanding.” (Continued Below)

Ratcliffe noted that these are conversations that shouldn’t be made public adding that the President “had to do that to conclusively determine his innocence– prove his innocence and prevent this ‘impeachment search party’ from going any further.”

Asked about impeachment, Ratcliffe said, “The American people know [after reading] the transcript know [Democrats] have been searching for a reason to impeach the President. They keep coming up empty and this transcript certainly doesn’t give them ‘impeachable evidence.’ There’s nothing untoward or any corrupt influence exerted in the words in these transcripts and I think that’s clear to anyone that will look at this objectively.”

He explained that Rep. Alexandria Ocasio-Cortez (D-NY), Speaker Pelosi and others “went way out on a limb, promised something that wasn’t in the transcript and now, they don’t want to back up on that, because they know their political lives are at stake.” (Video Below)

“The Democrats, their desire to destroy Donald Trump have harmed our national security today,” he stated.