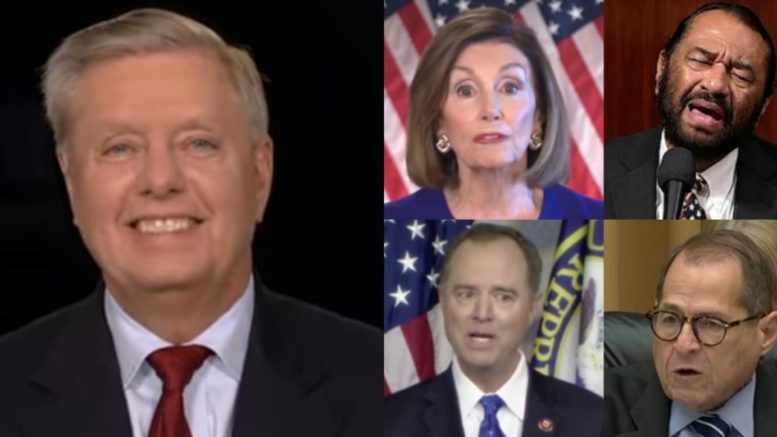 Senator Lindsey Graham was “underwhelmed” after reading through the transcript of President Trump’s conversation with Ukrainian President Volodymyr Zelensky.

Earlier on Tuesday, the Trump Administration released a full unredacted transcript of the transcript following Nancy Pelosi’s announcement of an impeachment inquiry into President Trump without having all facts available in regards to an alleged “whistleblower’s” uneasiness with the conversation.

In a pair of tweets, Senator Graham took direct aim at those who really think there is a “smoking gun” in the transcript at question and challenged them to take action if they feel they now have enough to impeach President Trump.

“Those who believe that the transcript is a ‘Smoking Gun’ for impeachment, do something about it – have the courage of your convictions,” Graham said on Twitter.

“The House of Reps should take a vote to formally open an impeachment inquiry,” he declared. “Let the American people see where Members of Congress stand!”

“If you are underwhelmed by this transcript, you are not alone or ‘crazy.'”, Senator Graham added. “Those willing to impeach the president over this transcript have shown their hatred for @realDonaldTrump overrides reason.” See Below

If you are underwhelmed by this transcript, you are not alone or “crazy.”

Those willing to impeach the president over this transcript have shown their hatred for @realDonaldTrump overrides reason.

Related Article: Gregg Jarrett Reveals How Pelosi ‘Misstated The Law’ & Why Trump Was Lawful In His Actions: ‘The President Is Duty-Bound’

In ending, here is video of Senator Graham challenging the “whistleblower” to appear before the Senate.