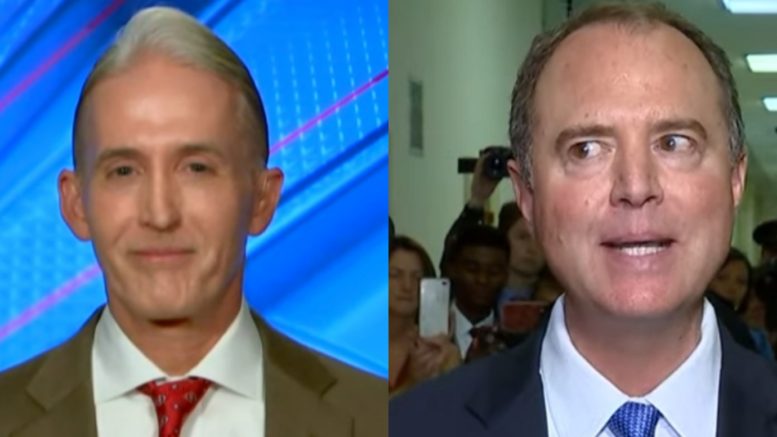 On Thursday, Trey Gowdy joined Martha MacCallum of Fox News and discussed a moment during the House Intelligence Committee hearing where Rep. Adam Schiff quoted words that were not actually in the transcribed phone conversation between President Trump and Ukrainian President Zelensky.

Martha played a clip of Schiff’s “Dr. Seussical” moment, as she called it, and asked Gowdy what he thought of it.

“Well, if you don’t have good facts, you gotta make them up,” Gowdy initially reacted.

“Adam Schiff has one of the worst senses of humor of anyone I’ve ever met,” he declared. “So, he doesn’t need to try parody.”

Gowdy went on to point out, “This is the same Schiff that said he had evidence of collusion. He’s not making that mistake this time. He’s not claiming he has something that he doesn’t have. He’s just gonna make it up, and he made it up on national television.”

Trey said he would applaud any Democrat who comes forward and criticizing Schiff for making anything up during a something serious as the hearing held by the House Intelligence Committee on Thursday. Video Below

Related Article: Nunes Rips The Left At Thursday’s Hearing, Calls Out Schiff For Trying To Get Nude Pics Of Trump

Update: President Trump responded to Schiff not reading from the phone call transcript at the hearing and called for him to resign in a new round of tweets that can be seen below.

…sound horrible, and me sound guilty. HE WAS DESPERATE AND HE GOT CAUGHT. Adam Schiff therefore lied to Congress and attempted to defraud the American Public. He has been doing this for two years. I am calling for him to immediately resign from Congress based on this fraud!