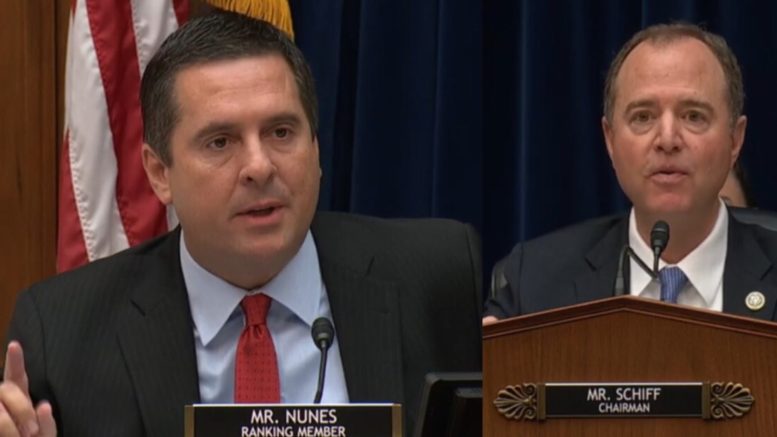 On Thursday, Acting Director of National Intelligence, Joseph Maguire, testified before the House Intelligence Committee on the whistleblower complaint that created a political firestorm in Washington and throughout the media.

The whistleblower complaint was released to the public right before the hearing started and it alleged that President Trump used the “power of his office to solicit interference” from a foreign country in the 2020 election — and that White House officials subsequently tried to “lockdown” records of that phone call.

The transcript of the July call, between President Trump and Ukrainian President Volodymyr Zelensky, was released Wednesday by the White House. It confirmed that President Trump sought an investigation from Ukraine into the Biden family, though it did not show the President explicitly leveraging U.S. aid as had initially been suggested in media reports.

But the whistleblower complaint, released by the Democrat-led House Intelligence Committee ahead of testimony from Acting Director of National Intelligence Joseph Maguire, goes further, though it is not a first-hand account of the call.

Ranking member of the House Intelligence Committee, Devin Nunes (R-CA), however, ripped the left for accusing the President of trying to interfere with an election while pointing out their hypocrisy. Nunes also called out Chairman Adam Schiff (D-CA) when he tried to once get nude pictures of the Commander of Chief.

“I want to congratulate the Democrats on the rollout of their latest information and warfare operation against the President and their extraordinary ability to once again enlist the mainstream media in their campaign,” Nunes said in his opening as  (Continued Below)

“This operation began with media reports from the ‘prime instigators’ of the Russia collusion hoax– that a ‘whistleblower’ is claiming a nefarious promise to a foreign leader. The released transcript of that call has already debunked that central assertion,” Nunes continued. “But that didn’t matter. The Democrats simply moved the goalpost and began claiming that there doesn’t need to be a quid pro quo for this conversation to serve for the basis of impeaching the President.”

Nunes described House Speaker Nancy Pelosi when she was asked if she would “put the brakes on impeachment” if the transcript turned out to be benign. The Ranking Member said she responded, “If the whistleblower operation doesn’t work out, the Democrats and their media… we have candidates, many candidates, for impeachable offenses.”

“So there you go. If the whistleblower operation doesn’t work out, the Democrats and their media assets can always drum up something else,” he clarified. (Continued Below)

Nunes pointed out other information that has come to light since the “false report” of a promise was made. “We’ve learned the following: The complaint relied on hearsay evidence provided from the whistleblower. The Inspector General did not know the contents of the phone call at issue. The Inspector General found the whistleblower displayed arguable political bias against Trump. The Department of Justice investigated the complaint and determined no action was warranted. The Ukrainian President denies being pressured by President Trump,” he explained.

“So once again, the supposed scandal ends up being nothing like what we were told. And once again, the Democrats and their media mouth-pieces and a cabal of leakers are ginning up a ‘fake story’ with no regard to the monumental damage they’re causing to our public institutions and to trust in government. And without acknowledging all the false stories they propagated in the past, including countless allegations that Trump campaigned and colluded with Russia to hack the 2016 election. We’re supposed to forget about all those stories, but believe this one!” Nunes expressed.

The Ranking Member suggested that in short, this is another “Steele dossier” and clarified: “I’ll note here the Democrats mania to overturn the 2016 elections, everything they touch gets hopelessly ‘politicized.’ With the Russia hoax it was our intelligence agencies, which were turned into a political weapon to attack the President. And now today, the whistleblower process is the casualty.”

He said that until about a week ago, the need to protect that process was a primary bipartisan concern of the intelligence committee. “But if the Democrats were really concerned with defending that process, they would have pursued this matter with the quiet, sober inquiry as we do for all whistleblowers. But that would’ve been useless for them,” Nunes stressed. “They don’t want answers, they want a public spectacle! And so, we’ve been treated to an unending parade of press releases, press conferences, and fake news stories.”

Nunes noted that the current hearing is another example of the Democrats’ spectacle and noted that whistleblower inquiries should not be held in public, adding that the Senate is holding a hearing with Joseph Maguire behind closed doors. “But again, that only makes sense when your goal is to get information, not to create a media frenzy,” he said. (Continued Below)

Nunes went on to say, “The current hysteria has something else in common with the Russia hoax. Back then they accused the Trump campaign of colluding with the Russians when the Democrats themselves were colluding with Russians and preparing the Steel dossier. Today they accuse the President of pressuring Ukrainians to take actions that would help himself or hurt his political opponents. And yet, there are numerous examples of Democrats doing the exact same thing.”

He explained the controversy behind former vice president Joe Biden, who is seen on camera describing his story of getting a Ukrainian prosecutor fired, who was investigating his son, Hunter Biden. “Three Democratic senators wrote a letter pressuring the Ukrainian general prosecutor to reopen the investigation into former Trump campaign officials. Another Democratic Senator went to Ukraine and pressured the Ukrainian President, not to investigate corruption allegations involving Joe Biden’s son,” Nunes revealed.

The Ranking Member also said that according to Ukrainian officials, the DNC– contractor Alexandra Chalupa, tried to get Ukrainian officials to provide dirt on Trump associates and tried to get the former Ukranian President to comment publicly on alleged ties to Russia. Nunes also said that Ukranian official, Serhiy Leshchenko, was a source for Nelli Ohr, who is the wife of DOJ official, Bruce Ohr. Nelli Ohr worked on the anti-Trump operation that was conducted by Fusion GPS and funded by Democrats.

“And of course, Democrats on this very committee negotiated with people who they thought were Ukrainians in order to obtain nude pictures of Donald Trump,” Nunes announced, referring to Adam Schiff. [Emphasized].

“People can ask why the Democrats are so determined to impeach this President when in just a year they’ll have a chance. In fact, one Democratic Congressman, one of the first to call for Trump’s impeachment, gave us the answer when he said, ‘I’m concerned that if we don’t impeach the President, he will get reelected’,” the ranking member said in reference to Rep. Al Green (D-TX). (Video Below)

“Winning elections is hard and when you compete you have no guarantee you’ll win. But the American people do have a say in this and they made their voices heard in the last presidential election. This latest gambit by the Democrats to overturn the people’s mandate is unhinged and dangerous. They should end the entire dishonest, grotesque spectacle and get back to work to solving problems, which is what every member of this committee was sent here to do. Judging by today’s charade, the chances of that happening anytime soon are zero to none,” the Ranking Member concluded.