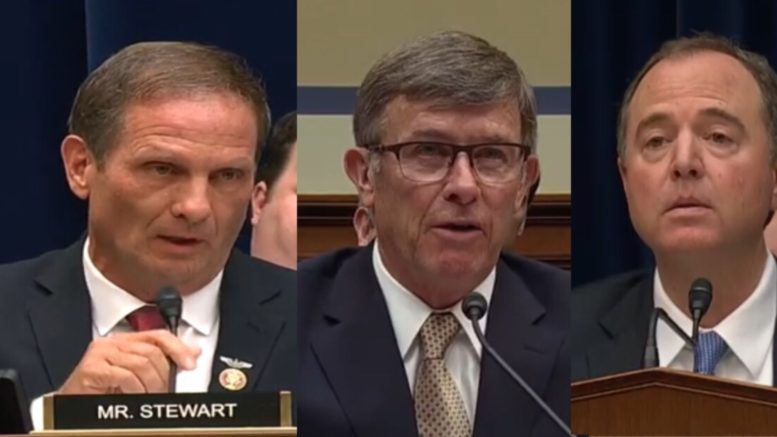 On Thursday, Rep. Chris Stewart (R-UT), questioned Acting Director of National Intelligence Joseph Maguire during a House Intelligence Committee hearing about a whistleblower complaint centered on a phone call between President Donald Trump and the President of Ukraine.

The whistleblower complaint, however, was released to the public right before the hearing started and it alleged that President Trump used the “power of his office to solicit interference” from a foreign country in the 2020 election — and that White House officials subsequently tried to “lockdown” records of that phone call.

The transcript of the July call, between President Trump and Ukrainian President Volodymyr Zelensky, was released Wednesday by the White House. It confirmed that President Trump sought an investigation from Ukraine into the Biden family, though it did not show the President explicitly leveraging U.S. aid as had initially been suggested in media reports and by Democrats.

Rep. Chris Stewart told Maguire that he wasn’t going to treat him like a child, unlike his colleagues, and was going to give him a chance to answer questions.

Stewart, who served 14 years as an Air Force piolet, praised Maguire for his long service of 36 years in the Navy and pointed to his colleagues to address criticism of those who have not served in the military, by saying that it is deeply offensive to have your honor and integrity questioned.

“Some of this committee have done exactly that. They’ve accused you of breaking the law. And I’m gonna read you just one part of many that I could, from the Chairman. ‘This raises grave concerns that your office, together with the Department of Justice, and possibly the White House, have engaged in an unlawful effort to protect the President,'” Stewart said referring to Adam Schiff. “And there are others I can read as they have sought, I believe, to destroy your character.” (Continued Below)

Asked if he was motivated by politics in his work of professional behavior, Maguire replied, “No I am not. I am not political. I am not partisan and I did not look to be sitting here as the Acting Director of National Intelligence. I thought that there were perhaps other people who would be best and more qualified to do that. But the President asked me to do this and it was my honor to step up and for the well of however long I’m doing it– to lead and support the Intelligence Community.”

Asked if he has followed the laws and policies in precedent in the way he’s handled the whistleblower complaint, Maguire said, “I do. I know I do.” Asked if he has sought to protect the President or anyone else from any wrongdoing, Maguire said, “I have not. What I have done is endeavored to follow the law.” Asked if he believes he had a legal responsibility to follow the guidance of the office of legal counsel, Maguire replied, “The opinion of the office of legal counsel is binding on the executive branch.”

Stewart asked if this is the first whistleblower complaint that falls under executive privilege and also the first time that it included information that was potentially outside of the authority of the DNI, Maguire said, “To the best of my knowledge, that is correct.” (Continued Below)

“I will say to my colleagues here, I think you’re nuts! If you think you’re gonna convince the American people that your cause is just, by attacking this man, and by impugning his character when it’s clear that he felt there is a discrepancy, a potential deficiency in the law, he was trying to do the right thing. He felt compelled by the law to do exactly what he did, and yet, the entire tone here is that somehow you’re a political stooge, who has done nothing but try to protect the President. And I just think that’s nuts,” Stewart expressed.

**It is worth noting, however, Stewart is correct because, during Schiff’s questioning, the Chairman condemned Maguire for not “coming forward” to announce publicly that the whistleblower didn’t have a political agenda. Had Stewart done than before the hearing, it would have made him appear political and partisan, or appear to fall into Schiff’s trap. Stewart said that he released a statement to his staff, but not the public.**

Stewart went on to say that anyone watching the hearing will walk away with “a clear impression that [Maguire] is a man of integrity, who did what [he] felt was right, regardless of the questions and the innuendo that is being cast by his colleagues sitting in here today.”

Asked if he knows who is feeding the press about leaks and if he has made any referrals to the DOJ for unlawful disclosures, Maguire said, “No. I believe anybody that witnesses or sees any wrongdoing or complaints, should refer [it] to the Department of Justice for investigation.” (Video Below)

Stewart concluded, “I would emphasize once again: good luck convincing the American people that this is a dishonorable man sitting here. Good luck convincing the American people that he has done anything that he thinks is right. If you think it scores political points with your friends to have wanted to impeach this president from the day he was elected, then keeping going down that road.”