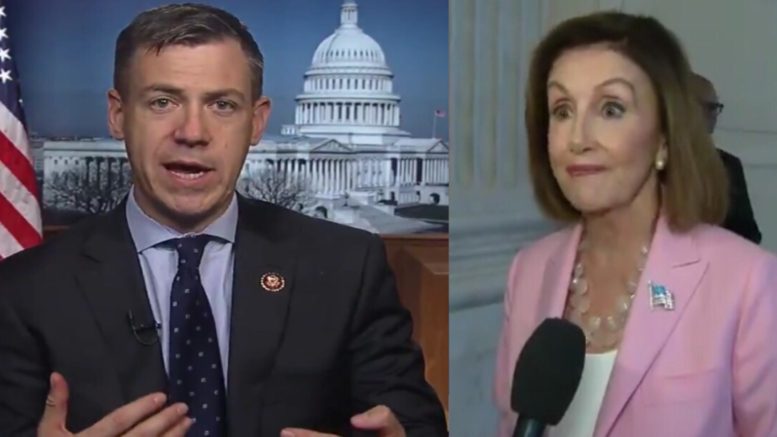 Rep. Jim Banks (R-IN) took to Twitter on Friday where he posted a video message blasting House Speaker Nancy Pelosi (D-CA) after she declared a formal “impeachment inquiry” on Tuesday, a day before President Trump released the transcript of his phone call with Ukrainian President Volodymyr Zelenksy.

Banks believes she launched an impeachment inquiry based on a rumor, made by a whistle-blower with second-hand knowledge, and that the House Speaker owes the American people an apology.

Rep. Banks said in his Twitter video that the whistleblower had “second-hand knowledge” based on a “rumor” and explained why the rumor spread about the President is false.

“That rumor was that President Trump threatened to withhold foreign aid and pressured Ukraine to investigate Biden,” he stated.

“I read the transcript and in that transcript, President Trump was very friendly. It sounded like two closely allied countries and leaders speaking to one another. He did not threaten to withhold foreign aid,” Banks said.

He pointed out that on Wednesday, Ukrainian President Zelenksky publicly admitted during a conference with President Trump, that he did not feel any pressure from Trump to investigate Biden’s son. (Continued Below)

“And so, the rumor that Nancy Pelosi based her impeachment decision on turned out to be ‘false.’ And as a result, she looks foolish for rushing to call for ‘impeachment,'” Rep. Banks continued.

On Wednesday morning, House Republican Leader, Kevin McCarthy (R-CA) held a press briefing with GOP leaders and slammed Speaker Nancy Pelosi, calling on her to apologize to the nation after she mislead Americans Tuesday during her press conference.

Banks said that he agrees with McCarthy: “Nancy Pelosi, Speaker of the House, owes the American people an apology for calling for impeachment, before ever seeing evidence or before ever seeing any facts, because she is dragging us through another divisive battle, instead of working on the policies that will move our country forward.” (Continued Below)

Upon the release of the transcript between President Trump and Ukrainian President Zelensky on Wednesday, Pelosi admitted to the press that she “hadn’t seen it.” But, that didn’t stop her from concluding that President Trump thwarted the Constitution.

“I haven’t seen it,” Pelosi admitted. “The fact is that the President of the United States, in breach of his constitutional responsibilities, has asked a foreign government to help his political campaign at the expense of our national security, as well as undermine the integrity of our elections. That cannot stand. He will be held accountable, no one is above the law.”

Rep. Banks went on to point out: “Pelosi could be having a bipartisan vote on USMCA, working on ways to combat the Chinese threats that we are facing economically and militarily, or working together to solve our debt crisis. But instead, we spend two years investigating a false Russian collusion narrative.”

“How long do we plan on pursuing this narrative? the Indiana Congressman asked. “It’s already falling apart, and I think most people, especially the people who sent me here, want us to govern and do our job.” (Video Below)

.@SpeakerPelosi launched an impeachment inquiry Tuesday based on a rumor made by a whistle-blower with second-hand knowledge. Now we know that rumor is false.

I agree with @GOPLeader. @SpeakerPelosi owes the American people an apology. pic.twitter.com/LKyJJGIOck

On Friday, House GOP Leader reiterated his call for the Speaker to apologize and tweeted, “The Speaker of the House moved to have an impeachment inquiry *before* she read one word of evidence. Now that the transcript and whistleblower complaint are out, she owes the American public an apology.”

The Speaker of the House moved to have an impeachment inquiry *before* she read one word of evidence. Now that the transcript and whistleblower complaint are out, she owes the American public an apology.

(Related: Newt Gingrich Reveals Why He Thinks Pelosi Made A Bad Move With Her Impeachment Push: ‘Makes No Sense At All’)