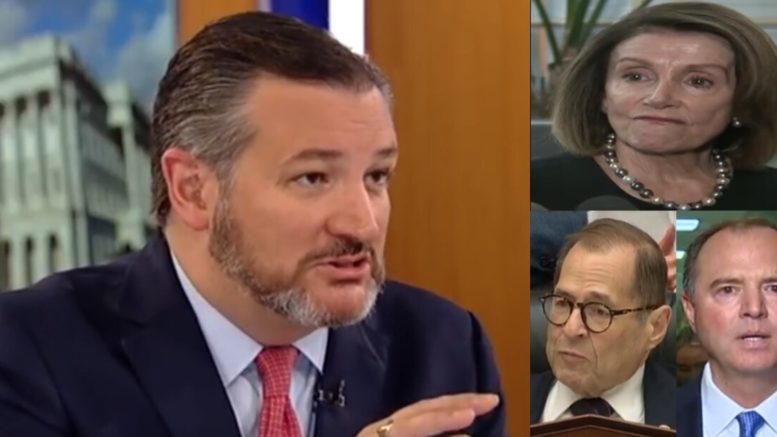 Cruz believes Democrat’s effort is not driven by facts and added that the transcript of President Trump’s phone call with the president of Ukraine is not an “illegal quid pro quo.”

The Texas Senator reacted to House Speaker Nancy Pelosi (D-CA) moving forward with an impeachment inquiry this week, however, Democrats have not officially voted to impeach. They have accused President Trump of abusing his office by requesting that Ukraine investigate former Vice President Joe Biden.

“Washington is always a circus, but this is three rings with all the clowns and it’s nuts right now. And it’s driven at the end of the day– congressional Democrats are ‘angry.’ They’re angry about the 2016 election, and ultimately they’re angry at the voters. They’re angry that the voters elected President Trump,” Cruz expressed.

President Trump’s July conversation with Ukrainian President Volodymyr Zelensky resulted in a whistleblower complaint that set off a political firestorm in Washington, D.C. Some Democrats allege the President sought a quid pro quo – by trying to trade U.S. military aid for dirt on Biden. (Continued Below)

Asked if anything in President Trump’s transcript or the whistleblower complaint concerned him, Cruz replied, “What we have seen from the Democrats is a consistent and relentless push to impeach, regardless of the facts. So for months and months and months, it was all about Mueller. … Mueller is gonna prove everything is wrong. Then the Mueller report came in and it found no collusion. And suddenly all the Democrats who’d been screaming ‘impeach’, they had nothing to say.”

“Now, they’re all screaming ‘Ukraine, Ukraine, Ukraine!’ And oddly enough, it’s the exact same conclusion ‘impeach the President’. By the way, in a month or two, it’s liable to be something else. It’s not driven by facts. We gotta know what the facts are. There’s an investigation in the Senate. The Senate voted unanimously to send this complaint to the Senate Intelligence Committee. We’ll figure out what the facts are,” he added. (Video Below)

(Related: Gowdy Slams Schiff For ‘Making Stuff Up’ At Thursday’s Hearing: ‘If You Don’t Have Good Facts, You Gotta Make Them Up’)