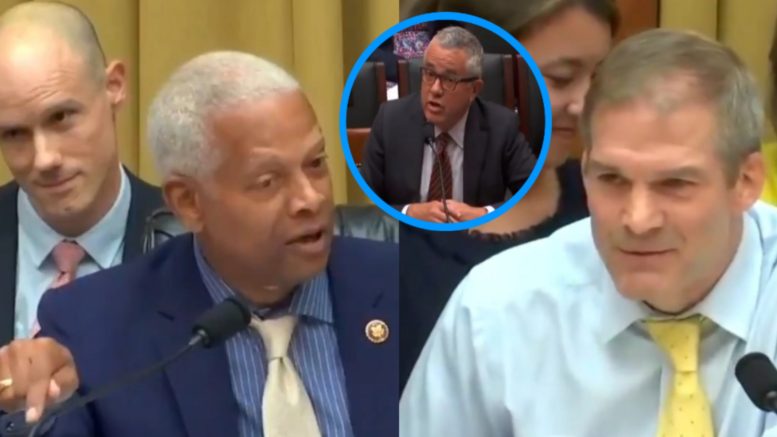 Congressman Jim Jordan had one heck of a time trying to question CNN legal analyst Jeffrey Toobin during a House subcommittee hearing titled “The Federal Judiciary in the 21st Century: Ensuring the Public’s Right of Access to the Courts.”

Democrat subcommittee chairman Hank Johnson, repeatedly interrupted Jordan during his line of questioning as he considered it to be an “extraneous” topic.

Jordan was grilling Toobin over why he reported earlier to a live national audience that “the Justice Department has been corrupted,” while covering the whistleblower story. And Jordan wondered why Toobin never mentioned key facts pertaining to the Justice Department that were already known in the case.

Toobin agreed that he made his assessment based on the whistleblower’s complaint, and admitted that he did read the Justice Department’s statement pertaining to the matter.

After Jordan read key takeaways from the Justice Department’s statement, Toobin reiterated that he based his remarks on the whistleblower’s complaint and as he began to provide a more in depth answer, an irritated chairman Johnson interrupted the discussion.

“I’m going to object here and caution my friend from Ohio that this subject does not pertain to this hearing and it’s disruptive and it’s disrespectful. ” Johnson said. He told Jordan that he’ll allow him to continue but in the future will not “tolerate this imposition” in subcommittee hearings he chairs. Video Below

After sparring over time being reset, Johnson allowed Jordan to continue as Jordan argued his questioning pertained to Toobin’s opening statement that included Ukraine. However, Johnson again warned Jordan not to bring “extraneous” topics into discussion during hearings that he chairs.

Jordan was able to make some solid points, while Toobin continued to reply with remarks in support of the whistleblower’s statement. But as Jordan was ready to ask his final question, Rep. Johnson stopped him again by slamming the gavel and saying his time was up. Jordan goes, “Mr. Chairman, are you kidding me?”

Johnson confirmed Jordan’s time was expired and added, “I want the gentleman to know that the next time he comes into my subcommittee and disrupts it in this way…I’m gonna be prepared through our rules to hold you accountable.” Video Below

Democrats are so desperate to attack the President that they won't even allow Republicans to speak. pic.twitter.com/5pGZwdIDdL

Related Article: Levin Holds Up The Whistleblower’s Statement & Points Out Multiple Suspicious Aspects Of It