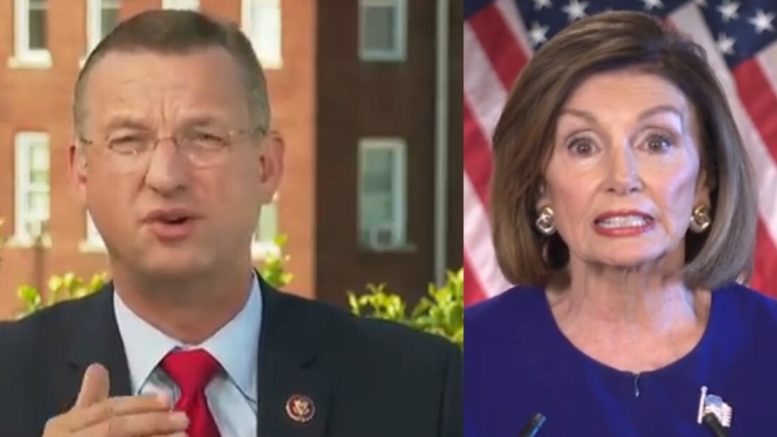 He also weighed in on the so-called “whistleblower complaint” and the DOJ’s ongoing investigations, suggesting that “Democrats are scrambling because they know time is running out,” before the “big picture is revealed” to the American public.

“This week we saw a dark day in the House. We saw Speaker Pelosi ‘abuse her oath of office’, if you would, by abusing the role of Speaker by saying an ‘impeachment inquiry’ has started. And we’re sending it to the intelligence committee, where you have a gentleman who has a habit of lying about the facts, Mr. Schiff,” Rep. Doug Collins said. [Emphasized].

The Judiciary Ranking Member clarified, “What that means is though, they’ve decided to walk down a path, in which, contrary to American values, they’re not going to allow this President to have due process. They’re not going to be fair, they’re gonna ‘ram-rod’ this thing through, because as I heard a member of House leadership this morning say on the news, another network, that he ‘wanted to have an inquiry, but he wasn’t ready to vote for impeachment.'”

Collins believes Democrats are not serious about impeachment. “If they were truly serious about that, they would bring it to the floor, they would have a vote, and then, there would be fairness and the American people could know this was not just simply a Democrat ram-rod of this President,” he explained.

“All you’ve had to watch is our committee completely fall apart under investigation. In fact, any time we’ve been allowed to have investigations, whether it be the Mueller report or these ridiculous hearings Chairman Nadler’s had in the Judiciary Committee, it has always tended to have shown that the President has done nothing wrong,” Collins continued.

He pointed out that the Russia collusion and conspiracies were a false narrative when you “actually investigate”, adding, “So now they’ve decided, ‘Let’s throw that out the window because that’s not working for us. Fairness is not working. Being on the right side of the American people is not alright, so we’re gonna ram-rod it through.’ That’s what’s happening right now.”

Maria Bartiromo switched gears to the subject of the “whistleblower” who did not have “first-hand knowledge” of the phone call between President Trump and Ukrainian President Zelenksy. “What are rules around the whistleblower in terms of what that person can charge?” she asked Collins. (Continued Below)

“Well, that’s really interesting because we’ve found out the whistleblower rules, especially in the intelligence community, seemed to have been changed. And they’ve been changed from requiring and demanding a first-hand account or actual knowledge of the abuse or the misuse of issues in the intelligence community, to now where they can have second-hand information,” Collins revealed after a report from The Federalist exposed the information.

He also noted that the “whistleblower complaint” is a “very well written document”, asserting, “You don’t expect this coming in the form of a legal document accusing a president of doing something in an illegal fashion and doing so from second-hand information.”

Collins believes that with the other ongoing investigations that will soon reveal damning evidence, referring to Inspector General Michael Horowitz and John Durham’s probes, that Democrats will have to deal with the entire picture. “They’re rushing to judgment because they know time is running out, and they’re desperate for this President not to win next year. This is the derangement syndrome in the House right now,” he said.

“The accountability is coming, you see all the major players continuing to scramble making up stories on they were just really doing their job. It sounds very similar to ‘Oh, I didn’t do anything, don’t look over here.’ I think Bill Barr, the Inspector General, Mr. Durham are all looking into this. And I do believe, this is coming and this accountability will happen,” Collins stated. (Video Below)

“It’s time to stop the harassment of this President. It’s time for the House to do what they need to be doing and that is get back to the people’s business,” the Judiciary Ranking Member recommended.

(Related: Graham: ‘I Have Zero Problems With This Phone Call, But I Do Have A Problem With Nancy Pelosi’)