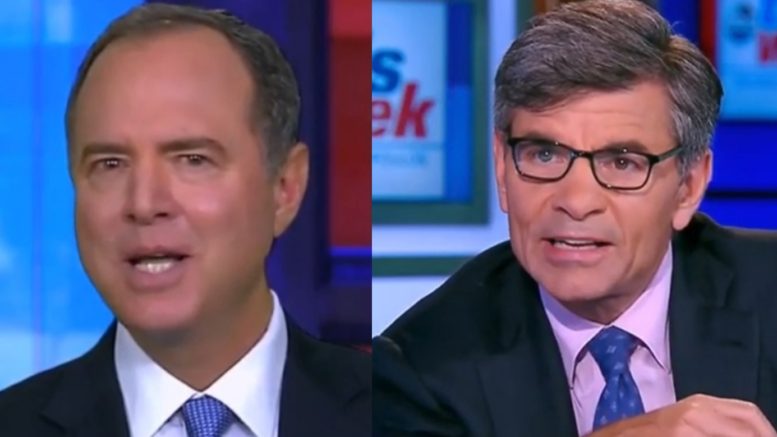 ABC’s George Stephanopoulos got a chance to grill House Intel Chairman Adam Schiff over his controversial opening statement at Thursday’s hearing that included “making up” words that he insinuated were said during President Trump’s phone call with Ukraine President Zelensky.

After being called out by President Trump and others about the episode, Schiff claimed that it was meant to be a parody. However, Stephanopoulos thought that wasn’t a sufficient answer as he pressed Schiff over it.

Related Article: Gowdy Slams Schiff For ‘Making Stuff Up’ At Thursday’s Hearing: ‘If You Don’t Have Good Facts, You Gotta Make Them Up’

During his Sunday program, Stephanopoulos played the clip for Schiff making the the so-called “parody.” He then asked  the Congressman, “If the facts are as damning as you say, why make up dialogue for dramatic effect, even if it’s a parody, as you say?”

Schiff provided an insufficient explanation for his move, as he stated the call does “speak for itself” and it is “damning.”

“But let’s not pretend that this is what the President is upset with me about,” Schiff said. “I can tell you exactly why the President is furious with me. And that is because when I learned that a whistleblower had filed a credible and urgent complaint that was being withheld from Congress, and no one in the country knew about this yet, I went public to demand that we get that complaint.” Video Below

Schiff claimed that it was because of him going public that ultimately led to the White House handing over the whistleblower’s complaint and also releasing the full unredacted call transcript between Trump and Zelensky.

That, according to Schiff, is why President Trump and the White House are angry with him.

However, he failed to provide a solid explanation for why he made up parts of the phone call in question during his opening statement at Thursday’s hearing, as Stephanopoulos was really asking about. Video Below