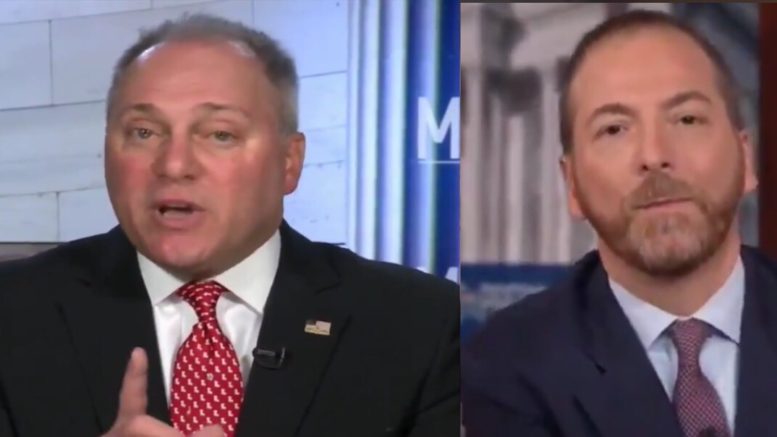 Sunday during an interview on NBC’s “Meet the Press”, House Republican Whip Steve Scalise (R-LA) spoke with host Chuck Todd where he pushed back saying he “would not allow the media [to] get away with reciting Democrat talking points”.

Scalise defended President Donald Trump amid House Speaker Nancy Pelosi (D-CA) and the Democrats’ impeachment inquiry against the President, despite Democrats not having all the facts beforehand, and one day before President Trump publicly released the transcript of a phone call between him and Ukrainian President Zelensky.

“It sounds like you’re reading a lot of these Democrat talking points,” Rep. Scalise said directly to Chuck Todd during the interview.

“The people have been saying for years that the President was involved in things, and then, none of it turned out to be true,” he explained. “The Mueller investigation was their ticket to impeachment.”

(Related: Stephanopoulos To Schiff: ‘If The Facts Are As Damning As You Say, Why Make Up Dialogue?)

Scalise then asked, “Shouldn’t, by the way, Chuck, shouldn’t they first have voted to start an impeachment inquiry, which is always what has happened. This is only three times in the history of our country that Congress has moved articles of impeachment, and they wouldn’t even do that. It’s like they’re trying to shield their members from voting on this while they continue to go down the drumbeat of impeachment.” (Continued Below)

“Because the author of impeachment articles said, ‘He’s concerned that the President will get reelected’, that’s not why you impeach a President,” Scalise added referring to Rep. Al Green (D-TX).

Scalise isn’t buying Democrats’ “impeachment push” however and believes that if Democrats truly felt President Trump committed a crime and if they really had enough evidence to impeach him, the GOP Whip thinks their actions would prove so.

On Saturday, Scalise provided two burning questions that expose the lack of seriousness out of Democrats in their impeachment push and targeted House Intelligence Chairman Adam Schiff (D-CA) and Speaker Pelosi. (Continued Below)

“If they were so serious, why did Adam Schiff have to start his committee hearing with a parody, a joke, trying to make fun of this and actually lying about what really happened, and trying to make up a conversation between the President and Ukraine President Zelensky?” Scalise asked on Saturday.

“If [Pelosi] really thought he should be removed, why did she then leave town for two weeks?” Scalise wondered. “The next two weeks, Congress will not be in session. If you thought the President committed such a high crime and misdemeanor that he should be removed, would you really leave for two weeks, or would you keep everybody there day and night until you got to the bottom of the facts?”

He then answered his question: “There are no facts for impeachment. They want to appease their radical base and it’s dangerous, dangerous to go down this road.”

Steve Scalise tweeted on Sunday with a clip of his interview with Chuck Todd and wrote, “I won’t let the media get away with reciting Democrat talking points. The fact is Pelosi broke precedent & started this baseless impeachment inquiry without a vote. Why? She wanted to shield her members from going on record that they support this witch hunt of @realDonaldTrump.” (Video Below)

I won't let the media get away with reciting Democrat talking points.

The fact is Pelosi broke precedent & started this baseless impeachment inquiry without a vote.

Why? She wanted to shield her members from going on record that they support this witch hunt of @realDonaldTrump. pic.twitter.com/TCIJSsFfKS

Related Article: Rep. Banks Blasts Pelosi For Launching An Impeachment Inquiry Based On A False Rumor, Demand An Apology