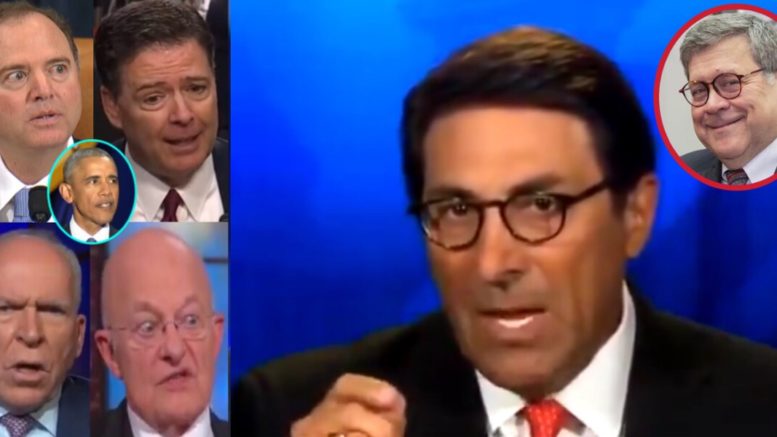 Jay Sekulow, an attorney for President Trump and the chief counsel of the American Center for Law and Justice, spoke with host Sean Hannity on Fox News Monday where he listed several reasons to be skeptical as Democrats are ramping up their “impeachment efforts” against President Trump with subpoenas and depositions pertaining to the phone call between him and Ukraine President Volodymyr Zelensky.

Sekulow offered a timeline that explained the changes to the whistleblower rules days before then-President Barack Obama left office. He also warned they will “find out who’s doing what,” and predicted that the Commander in Chief would come out winning from this “skirmish”.

Hannity explained Ukraine is at the heart of all of this. “The President says ‘We need you to get to the bottom of election interference on the 2016 election’,” Hannity said referring to the transcript between President Trump and Ukraine President Zelensky.

“Let’s remember how this starts: Days before President Trump is sworn into office, … there is a change in intelligence information sharing. For eight years, the Obama administration was quite satisfied with it going to just three agencies. With about ten days left, before the transition to a new President, they switched that and allowed it to go to 18 agencies,” Sekulow said.

“James Comey also has planted over at the White House an agent from the FBI dual assigned, going back and forth between the FBI and the White House. What was that person’s job? Then we have the leaks. Let’s talk about these leaks for a moment. You’ve got conversations starting in the early part of the administration that were leaked by intelligence officials, public conversation, private conversations released to the public. That’s called a crime, he continued.

“Then, you have it continuing. Continuing even this afternoon. We’re getting more information,” Sekulow added. (Continued Below)

“So, now, the President of the United States, on phone calls with other heads of states, now has to understand that his phone calls are likely to be leaked to the press. Why are they doing this? Could it be they are doing this because there’s an investigation of the investigators going on by Mr. Durham, the U.S. attorney in Connecticut? Could that be the reason that this is all happening? Sekulow asked. [Emphasized]

“You look at what is the rule, regulation, statute that was violated in the conversation that the President had with the President of Ukraine? None. Nothing. Where was the collusion with Russia? Did not exist. Where was the obstruction? Did not happen. Now, it’s Ukraine. Well, then, it was, first, it was quid pro quo, but then there was no quid pro quo. Then, it was a cover-up except the transcript had already been released,” he explained.

“So, you know this is? This is an attempt, a lame one, I have to say, from the Democratic Party right now to placate their leading left-wing people that are actually running this party it appears,” Sekulow expressed. [Emphasized] (Continued Below)

Sekulow ripped House Intelligence Committee Chairman, Adam Schiff (D-CA), suggesting that what he did was a fraud being perpetrated on the American people after his “dramatic presentation” when he didn’t read the White House transcript accurately.

“So, what does Adam Schiff do? He doesn’t read the transcript. Why didn’t he read it? Because there’s nothing to it. There’s no problem. What does he do instead? He comes up with a dramatic presentation, a reenactment not based on the actual script. When he had the actual script because the White House released it,” he said.

“So, what is this? This is a fraud being perpetrated on the American people. And now, we have a pattern and a practice of intelligence officers, people assigned to intelligence agencies, leaking conversations of the President of the United States with heads of state,” he added.

Sekulow warned, “We will find out exactly who’s doing what, how it was being handled. Did it start with that initial executive order by President Obama at the end of his administration? What is happening now, we’re going to get to the bottom of it.” [Emphasized]. (Video Below)

“You know what? We went through a war with Bob Mueller and we won. ‘This is a skirmish.’ We don’t need a war room. We just we need to respond as appropriate, we will. This will be handled. That’s it,” Sekulow expressed.

Jay Sekulow’s official remarks in the two short clips below:

.@JaySekulow says they went through a war with Bob Mueller and this is just a squeamish. They don’t need a war room for this. They just need to respond as appropriate and this will be handled. pic.twitter.com/nlqRWi903s