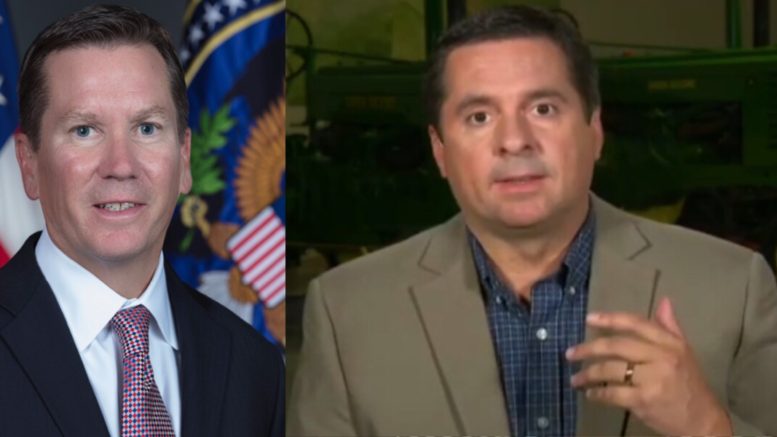 Republicans on Monday challenged intelligence community officials to explain why a key whistleblower form was apparently changed to drop a requirement for “first-hand information,” questioning whether the timing was related to the explosive complaint on President Trump’s call with the leader of Ukraine, as reported by Chief Intelligence correspondent, Catherine Herridge, of Fox News.

The whistleblower complaint ignited a political firestorm in D.C. that caused House Speaker Nancy Pelosi to cave to her far-left base, to which she announced a formal impeachment inquiry last week against the President. The complaint, however, was based on second-hand accounts from “more than half a dozen U.S. officials.”

The Federalist reported that a key form was recently revised to drop a requirement that such complaints include first-hand information in order to be sent to Congress.

The watchdog wrote: “In the process of reviewing and clarifying those forms, and in response to recent press inquiries regarding the instant whistleblower complaint, the ICIG understood that certain language in those forms and, more specifically, the informational materials accompanying the forms, could be read – incorrectly – as suggesting that whistleblowers must possess first-hand information in order to file an urgent concern complaint with the congressional intelligence committees.”

Ranking Member of the House Intelligence Committee, Rep. Devin Nunes (R-CA) spoke with host Laura Ingraham Monday on Fox News where he fired off a challenge after the ICIG claimed that the Whistleblower did have “first-hand knowledge.” (Continued Below)

Nunes explained that he has not seen the evidence of the whistleblower’s “first-hand” knowledge yet, and noted that the ICIG’s press release. “Just because the IG says so, they haven’t provided us that evidence,” he stated. “Furthermore, he didn’t answer anything in that 3-page press release, the questions that we asked in our letter.” (See letter below)

“So he has until Thursday to provide us the facts, the evidence, the emails,” Rep. Nunes challenged. “They admit that they changed this regulation, this guideline. They changed it because of this whistleblower. He admits it in his own press release. The mainstream media is trying to cover this up, but come Thursday, if he doesn’t provide the actual evidence, all the communications, we will see him on Friday and we will interview him on this.”

“We think this is very suspicious between the changing of the guidelines and the leaks– that there are some criminality involved in this,” Nunes added. (Continued Below)

“When this revised form was published, and whether the whistleblower received a copy of this form when making the disclosure on August 12, 2019, are both unknown to the House Intelligence Committee. However, the timing of the removal of the first-hand information requirement raises questions about potential connections to this whistleblower’s complaint. This timing, along with numerous apparent leaks of classified information about the contents of this complaint, also raises questions about potential criminality in the handling of these matters,” the Congressmen wrote in part.

They pointed out that a prior version of the form published in May 2018 included clear language saying a whistleblower must have first-hand information to be deemed credible.

The President also took note of the apparent change and tweeted in all caps Monday: “WHO CHANGED THE LONG STANDING WHISTLEBLOWER RULES JUST BEFORE SUBMITTAL OF THE FAKE WHISTLEBLOWER REPORT? DRAIN THE SWAMP!”

(Related: Rep Nunes Exhibits How The Whistleblower ‘Scheme’ Backfired For Biden: ‘This Probably Could Be The End’)