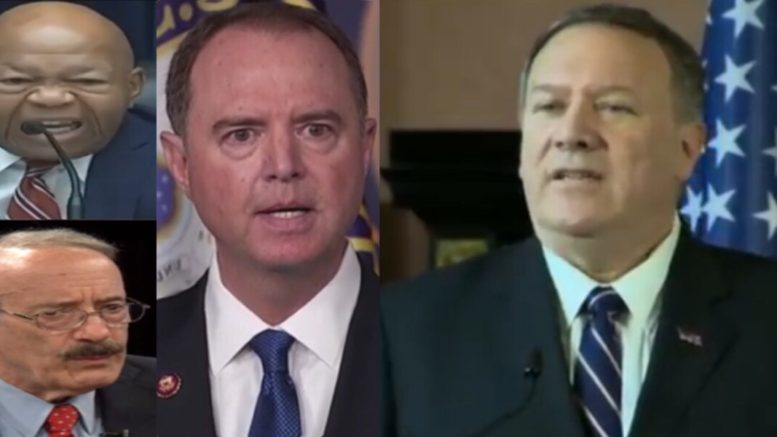 Secretary of State Mike Pompeo answered questions from the press during a news conference in Rome Wednesday, and he hit back at House Democrats amid their “bullying and intimidation” demands to hear from department staffers on the phone call with President Trump and Ukrainian President Zelensky.

Pompeo said that it is “fundamentally not true” that he is trying to deny officials from testifying before the Democrat’s committees, and he reiterated he will not “tolerate” congressional bullying.

On Tuesday, Mike Pompeo issued a defiant response to the House Democrats’ committee deposition requests after their attempt to depose State Department officials as part of the ongoing impeachment efforts against President Donald Trump.

“I’m concerned with aspects of the Committee’s request that can be understood only as an attempt to intimidate, bully, & treat improperly the distinguished professionals of the Department of State, including several career FSOs,” Pompeo wrote on Twitter with an attached letter.

He added, “Let me be clear: I will not tolerate such tactics, and I will use all means at my disposal to prevent and expose any attempts to intimidate the dedicated professionals whom I am proud to lead and serve alongside at the Department of State.”

“The predicate to objecting to what the folks on capitol hill have asked is ‘fundamentally not true.’ What we objected to was the demands that were put that deeply violate fundamental principles of the separation of powers,” Pompeo said Wednesday to a reporter. “They contacted State Department employees directly, told them not to contact legal counsel at the State Department, at least that has been reported to us.” (Continued Below)

Pompeo added that Democrats said representatives from the State Department were not able to be present during those depositions, adding that it is not acceptable. “There are important constitutional prerogatives that the executive branch has so that we can be present so that we can protect important information,” Pompeo explained.

“So, the response that I provided to them was one that acknowledged that we will, of course, do our constitutional duty to cooperate with this co-equal branch, but we are going to do so in a way that is consistent with the fundamental values of the American system,” Pompeo continued.

“We won’t tolerate folks on Capitol Hill bullying and intimidating State Department employees. That is unacceptable and it’s not something I am going to permit to happen,” he expressed. [Emphasized]. (Continued Below)

Pompeo’s comments came after he first sent a letter to Democrats Tuesday saying their “requested dates for depositions are not feasible,” claiming the lawmakers had not given State Department employees enough time to prepare and voicing concern that the committee was trying to prevent State Department counsel from participating, as reported by Fox News.

By late Tuesday, Schiff, D-Calif., Engel, D-N.Y., and Cummings, D-Md., told the State Department, in a fiery letter, that Pompeo may now be considered a “fact witness” in their formal and ongoing impeachment inquiry. The Democratic chairmen said Pompeo “now appears to have an obvious conflict of interest” because he “reportedly participated” in Trump’s phone call with Zelensky, per Fox News.

Pompeo said he was on the phone call adding that U.S. policy with Ukraine is focused on helping to get rid of corruption outside of their government and to help the new administration build a “successful and thriving” country.

“I was on the phone call but it was in the context of now, I guess, I had been the secretary of state for coming on a year and a half,” Pompeo said. “I know precisely what the American policy is with respect to Ukraine. It has been remarkably consistent and we will continue to drive those set of outcomes.” (Video Below)

“It’s what State Department officials, that I had the privilege to lead, have been engaged in. And it is what we will continue to do, even as this noise is going on,” Pompeo added.

(Related: Levin Holds Up The Whistleblower’s Statement & Points Out Multiple Suspicious Aspects Of It)