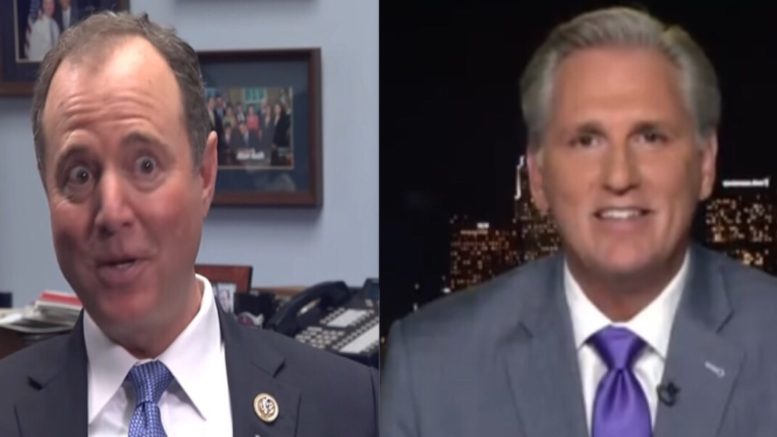 House Minority Leader, Kevin McCarthy (R-CA), spoke with host Laura Ingraham on Fox News Wednesday, where he made his case for why House Intelligence Committee Chairman, Adam Schiff (D-CA), should be removed from the committee due to his “lies and deceit”.

McCarthy added his name to a resolution Wednesday that would censure Schiff for reading a “parody” version of President Trump’s phone call with Ukrainian President Volodymyr Zelensky during a hearing last week.

The resolution to censure Schiff was introduced last Friday by Chairman of the House Freedom Caucus, Rep. Andy Biggs (R-AZ).

“Chairman Adam Schiff has been lying to the American people for years,” McCarthy wrote in a Tweet Wednesday. “Now he is so desperate to damage the president that he literally made up a false version of a phone call. Enough is enough. I have signed a resolution to censure Schiff in the House of Representatives.”

“We should go further than censure,” he told Ingraham on Fox News. “He should be removed from the Chairmanship of the Intel Committee. And one person makes that decision, the Speaker of the House. I requested that in March.”

McCarthy made his case as to why Schiff should be removed: “Let’s walk through this: Two years ago he lied to the American public, where he said he had proof and evidence, ‘beyond circumstantial’, and carried us through this nightmare for the last two years.” (Continued Below)

“He then met with Michael Cohen, his staff, three times, more than 10 hours. He met with Glenn Simpson with Fusion GPS, and now, he met with this whistleblower and lied to the American public? Every time they have attempted a coup, there’s been one common denominator: the lies and deceit of Adam Schiff,” McCarthy clarified.

“He is now, as you know, a ‘fact witness’,” the GOP Leader said, referring to a report from The New York Times, in which the Times reported on Wednesday that Schiff “learned about the outlines” of the whistleblower’s complaint “days before” it was filed. “And nowhere in our justice system, allows a ‘fact witness’ to be the prosecutor. He needs to recuse himself today and the Speaker needs to remove him as the Chairman of one of our most sensitive committees that we have, the intel committee,” he added.

McCarthy also noted that the Speaker is not carrying out “impeachment” in a fair process. “Every time that we’ve gone through on an impeachment, we’ve had an impeachment inquiry vote on the floor of the House. Why do you have that? [Be]cause it sets up the rules and it also empowers the minority to also have subpoena rights,” he said. (Continued Below)

McCarthy pointed out that impeachment is supposed to go through the Judiciary Committee, but Pelosi is going to Adam Schiff, saying that he is the “individual who has continued to lie,” adding “He lied on MSNBC, he lied last Sunday when he was asked does he know who the whistleblower is, he lied when he didn’t tell the intel committee when he had two opportunities, when he had already met.”

“This sounds a lot like the Kavanaugh situation, the same situation as building– of exactly what they’re doing here. This just shows it is all political,” he added.

McCarthy said that Schiff needs to “tells us what did he know, when did he know it, and how many times did he lie to us in the process?” He further asked, “You’re gonna tell me [Shiff’s staffer] never told the Chairman who he was, didn’t advise in the process, and Schiff didn’t advise the staffer on the direction? Because what did they tell this whistleblower– where to go get an attorney, much like the person who came forward against Kavanaugh, the exact same pattern we have found before.”

“They should end this coup, [be]cause the common denominator is the lies of Adam Schiff,” McCarthy reiterated.

On Thursday, McCarthy also sent a letter to Pelosi to suspend the impeachment inquiry against President Donald Trump until “equitable rules and procedures” are formally set up.

Chairman Adam Schiff has been lying to the American people for years. Now he is so desperate to damage the president that he literally made up a false version of a phone call.

Enough is enough. I have signed a resolution to censure Schiff in the House of Representatives.

It is worth noting, Republicans are coming forward to sign Biggs’ resolution and stand in solidarity with President Trump.

I too have signed onto the resolution to censure Chairman Adam Schiff. Presenting false versions of phone calls in a political attempt to damage @realDonaldTrump is unacceptable and beneath the office to which Schiff was elected. https://t.co/Kl6pfdqowx

I just signed on to the Resolution to Condemn and Censure Adam Schiff for manufacturing false dialogue between @POTUS and President Zelensky during a House Intelligence Committee hearing. He has made a mockery of our Committee and should step down as Chairman.

I signed the resolution to condemn and censure Adam Schiff after he intentionally fabricated a transcript of President Trump's phone call. He is unfit to lead the House Intelligence Committee and should step down in shame. #FullOfSchiff

Adam Schiff has no shame, and his recent falsification of the President's phone call was beyond the pale.

I have also signed the resolution to censure Schiff. https://t.co/q1yicrNTLj

I have signed on this resolution to censure Schiff for his continuing lies and cover-ups. https://t.co/u9lWmskDwY

I have signed on to the resolution censuring @RepAdamSchiff. Chairman Schiff has made a mockery of this solemn process and the Democrats leading the impeachment charge have strayed far afield of the Constitutional impeachment parameters. It must stop. Full statement ⬇⬇⬇ pic.twitter.com/WtnjRbnOCl

I’ll be joining many of my colleagues on a resolution to censure Rep. Adam Schiff for his irresponsible and careless actions as part of his “parody” -something that’s way overdue. #CensureSchiff

With the latest findings on the Democrat Chairman of the House Intelligence Committee, it certainly looks like Adam is up Schiff's Creek. https://t.co/XzJqp8YiTT