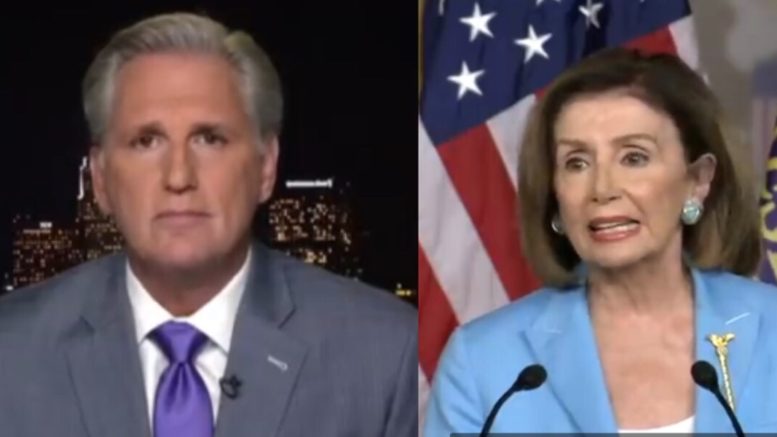 In his letter to Speaker Pelosi, Rep. McCarthy wrote that he wants public answers to a list of questions, imploring the American public deserves fairness and transparency.

“Unfortunately, you have given no clear indication as to how your impeachment inquiry will proceed– including whether key historical precedents or basic standards of due process will be observed,” McCarthy wrote.

“In addition, the swiftness and recklessness with you have proceeded has already resulted in committee chairs attempting to limit minority participation in scheduled interview, calling into question the integrity of such an inquiry,” he said.

McCarthy wants to know whether Pelosi plans to hold a full House vote on authorizing the impeachment inquiry, whether she plans to grant subpoena powers to both committee chairs ad the ranking members, and whether she’ll allow President Trump’s lawyers to attend the hearings.

Pelosi announced a formal impeachment inquiry against President Trump last week claiming “the President must be held accountable” for his “betrayal of his oath of office, betrayal of our national security, and the betrayal of the integrity of our elections.” (Continued Below)

“This week, the President has admitted to asking the President of Ukraine to take actions which would benefit him politically,” Pelosi claimed. “Therefore, today, I’m announcing the House of Representatives is moving forward with an official impeachment inquiry. I’m directing our six committees to proceed with their investigations under that umbrella.”

“The President must be held accountable,” she continued. “No one is above the law.”

During a “60 Minutes” interview over the weekend, Rep. McCarthy said, “The Democrats’ impeachment inquiry would never have moved forward if the Speaker of the House would have simply waited 48 hours to actually READ the transcript,” referring to the transcript President Trump released publicly between him and Ukrainian President Zelenksy. (Continued Below) 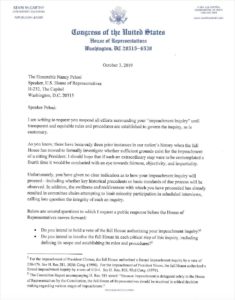 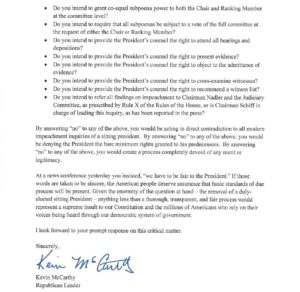 READ⬇️ I’ve written to Speaker Pelosi to halt the impeachment inquiry until we can receive public answers to the following questions. Given the enormity of the question at hand—impeaching a duly elected president—the American public deserves fairness and transparency. pic.twitter.com/EFKOghyf9w