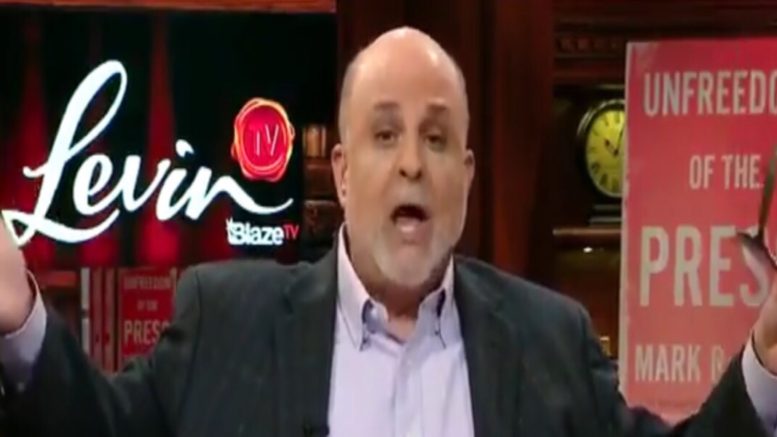 Mark Levin, “The great one”, spoke with host Sean Hannity on Fox News Thursday amid the Ukraine drama and Democrats’ impeachment efforts.

Levin believes the Republican-controlled Senate should invoke a “nuclear option” and dismiss any potential impeachment charges against President Donald Trump.

Mark Levin explained that the United States has offices “all over the world” in foreign countries that include FBI agents and others, who conduct criminal investigations. The investigations may involve embezzlement, money laundering, drugs and more, and Levin wondered, “Should be shut all those down? Or, is it just that we have an exception for anybody named [Joe] Biden?”

Levin continued, “As a former chief of staff to an attorney general, we are active in foreign investigations. We are asking foreign countries all the time to conduct investigations and provide us with information.”

On Friday morning, President Trump tweeted, “As President, I have an obligation to end CORRUPTION, even if that means requesting the help of a foreign country or countries. It is done all the time. This has NOTHING to do with politics or a political campaign against the Bidens. This does have to do with their corruption!” (Continued Below)

Levin then took aim at the “so-called whistleblower” and pointed out whoever it is, is a “rouge Democrat CIA agent”, adding that “He didn’t produce a complaint. He produced the second ‘impeachment document.'”

Then, he broke down what details have emerged about the whistleblower: “You have a CIA agent, who is a partisan Democrat. He meets with another partisan Democrat, a Schiff staffer. He doesn’t say, ‘I want to meet with both parties on the committee, [be]cause I’m really upset.’ No, he meets with a Schiff staffer. Why don’t we know this guy’s name? Schiff is briefed about what his staffer was told. Schiff lies about knowing anything on tv. Schiff withholds it from the Republicans, but who doesn’t he withhold it from? Nancy Pelosi!” Levin proclaimed. (Continued Below)

“How do I know that?” Levin asked rhetorically. “Because she goes to the podium like Eva Perrone and she declares, ‘now we’re gonna have an official impeachment inquiry’, without the transcript. How did she know? Because Schiff tipped her off about what was in this complaint.”

“And keep something in mind: not a single one of the individuals actually monitoring the phone call filed a complaint– sought to be a whistleblower, not one!” he declared.

Levin also pointed out that the Schiff staffer told the CIA agent to get a lawyer that happens to be a Schumer/ Clinton lawyer, who also happens to work with a group called “whistleblower aid”, adding that they were founded in 2017 for the purpose of “taking down the Trump administration.”

Levin then turned his attention to the Senate, which he contended was not Constitutionally bound to take up an impeachment trial. (Continued Below)

“You have a responsibility to protect the Constitution and protect this country and protect the office of the presidency,” he said, adding that Senate Majority Leader Mitch McConnell (R-KY) should “launch a nuclear option.”

“What am I talking about? Mitch McConnell was on TV saying, ’67 votes to change the rules.’ They changed the rules when it came to the courts, and they can change the rules here. Simple majority with a nuclear option allows the Senate to dismiss those charges … as soon as they come to the Senate,” Levin said. “Why? We can’t allow the Senate to be turned into a Nancy Pelosi ‘plaything’ by the House Democrats! We don’t have a House ‘impeachment inquiry’ going on here, but rather a ‘Democratic Party impeachment inquiry'”.

“Only the Senate has the power to police what the House Democrats are doing, and they should not participate in this!” Levin exclaimed. “It is not a House impeachment inquiry. There was no vote. It’s the Democratic Party’s abuse of power.”

“The Senate is not Constitutionally required to hold a trial. It should in most cases, but in this case, it should dismiss what is an absolutely defective, what will be [a] bunch of charges. Nancy Pelosi has intentionally prevented the Republicans from issuing subpoenas in this process. They are supposed to be able to. They must not allow her to prevail in her unconstitutional lawlessness. Senate, you better damn well step up!” he declared. (Video Below)

As President I have an obligation to end CORRUPTION, even if that means requesting the help of a foreign country or countries. It is done all the time. This has NOTHING to do with politics or a political campaign against the Bidens. This does have to do with their corruption!

(Related: Rep. Collins Describes Why He’s ‘Had It’ With Dems Trying To Impeach Trump & Files ‘Amicus Brief’ In Fed Court)