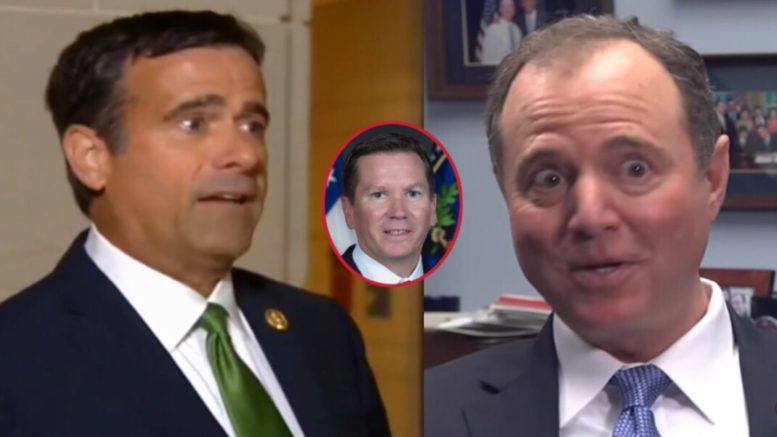 On Friday, Congressman John Ratcliffe (R-TX) said that Chairman of the House Intelligence Committee Adam Schiff (D-CA) “should be disqualified” from running an impeachment inquiry after he announced a stemming breakthrough from the Democrats whistleblower involvement.

Upon testifying on Friday before the committee, Intelligence Community Inspector General Michael Atkinson told congressional lawmakers that a CIA whistleblower “did not disclose contact with Schiff’s office before filing a complaint” against President Donald Trump.

Rep. Ratcliffe, who is on the Intelligence Committee, confirmed that Atkinson said he had no knowledge of whistleblower contacts with Schiff’s team. “Since the ICIG has no evidence whatsoever about the relationship and contacts between the whistleblower and Schiff’s staff, the investigation has to get that information from other fact witnesses. Who also happen (sic) to be running the investigation,” he wrote on Twitter.

Fox News’ Shannon Bream relayed the same information and tweeted: “Per Catherine Herridge: IC Inspector General told lawmakers the whistleblower did not disclose contact w Schiff/Committee staff – so IG never looked into it. IG ‘had no knowledge of it'”.

Schiff, however, claimed in interviews that he did not know what was in the complaint and he said he was glad that the ICIG had referred the complaint to his committee because he might not have known about it otherwise.  Schiff claimed publicly that “we have not spoken directly with the whistleblower.” (Continued Below)

While speaking briefly with the press, Rep. Ratcliffe said, “I can tell you one thing that we’ve learned very clearly and that is that the Inspector General for the Intelligence Community can provide no information about the contacts between the HPSCI Majority and the whistleblower, prior to his involvement.”

“So the only way that we’ll be able to get that information is from the HPSCI Majority themselves. They are fact witnesses in the same investigation that they are now running. Nowhere else in the United States of America can you both be a fact witness and the prosecutor or investigation in anything, much less an investigation to remove a president from office,” Ratcliffe explained. [HPSCI= House Permanent Select Committee Intelligence]

“It’s entirely inappropriate, and Chairman Schiff should be disqualified from running an investigation where his committee members or staff, are fact witnesses about contact with the whistleblower and the whistleblower process,” the Texas Congressman stated. (Continued Below)

The ICIG asks potential whistleblowers to disclose, under penalty of perjury, whether they filed their complaint with other inspectors general or members of Congress and to disclose any of those contacts. It is possible that the whistleblower could avoid disclosing the contact with Schiff’s office if he did not file a formal complaint, though the language on the IC IG’s whistleblower forms is not explicit on the matter, according to the Daily Caller.

On Wednesday, during a joint news conference, President Trump suggested Schiff “probably helped write the complaint” and blasted the California congressman while holding up the report from The New York Times.

“It shows that Schiff is a fraud. … I think it’s a scandal that he knew before,” President Trump said. “I’d go a step further. I’d say he probably helped write it, that’s what the word is. Just happened, as I’m walking up here, they handed it to me. And I said, ‘Whoa! That’s something, that’s big stuff. That’s a big story. He knew long before, and he helped write it too. It’s a scam.”

“The whole thing is a scam. The Mueller deal was a scam. The Russian collusion was a scam. You can ask Putin, nobody’s been tougher on Russia than Donald Trump,” he added during the news conference. (Video Below)

The President also took to Twitter Friday, after the latest revelations emerged pertaining to Schiff and the ICIG: “‘Adam Schiff’s connection to the Whistleblower is coming to light.’ @FoxNews These facts, and others, make it impossible for the ridiculous impeachment ‘scam’ to go forward!”

The Commander in Chief added, “Schiff has also committed a crime, perhaps treason, in making up a horrible statement and reading it to Congress, and the American people, as though it was the statement of the President of the United States, me. He did it to fool Congress and the public in order to make me look BAD. He is a sick puppy!”

….it to Congress, and the American people, as though it was the statement of the President of the United States, me. He did it to fool Congress and the public in order to make me look BAD. He is a sick puppy!

Per Catherine Herridge: IC Inspector General told lawmakers the whistleblower did not disclose contact w Schiff/Committee staff – so IG never looked into it. IG “had no knowledge of it”.