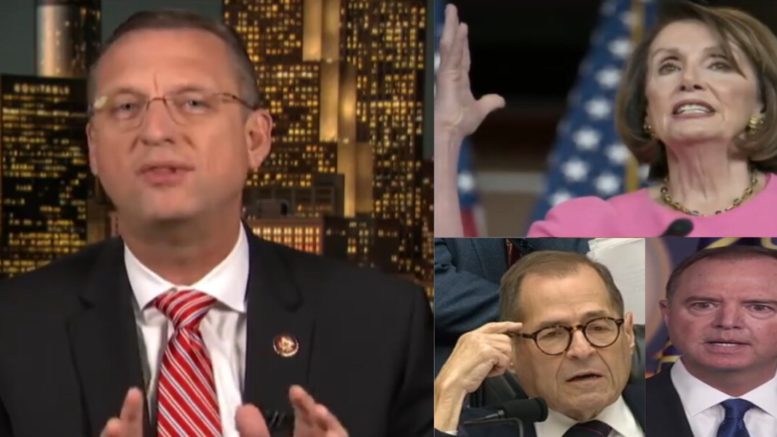 Ranking Member of the House Judiciary Committee, Doug Collins (R-GA) spoke with host Laura Ingraham on Fox News Thursday after he filed a 6e amicus brief, as he believes Democrats’ impeachment effort is a “sham”.

Asked how the Democrats can run a “credible” investigation without Republicans involved, Rep. Collins responded, “They can’t. And I’m at the point– I’ve had it. I’ve [had] nine months of this, I’ve been in the Judiciary Committee watching Jerry Nadler and his happy band of majority run roughshod rules. They don’t care about the rules. They want one thing at the end of the day and that is to impeach this President.”

Collins explained that Democrats have wanted to impeach President Trump since November 2016. “At the end of the day, people understand fairness. They maybe disagree with the President, they may not even like this President, but they understand when you have a Speaker of the House who refuses to bring the inquiry to the floor. Why does that matter? Because if she made her Democrats vote for an inquiry, and they started a true inquiry, then we in the minority have rights.”

He clarified that as the Ranking Member, he would have subpoena power, just as House Judiciary Chairman, Jerry Nadler (D-NY). “The President could actually weigh in with his team to say [he’s] actually being accused. Isn’t that a unique concept, Laura? In America, we actually believe that people have due process rights, but this Speaker is running roughshod over the House, and it’s got to stop. This is a travesty and it’s affecting the institution of the House,” the Georgia Congressman said.

Collins also filed an amicus brief in federal court contesting the legality of the Democrats’ inquiry, arguing the House must take a vote before the process begins.  Additionally, the White House will send Pelosi a letter on Friday, “daring” her to hold a vote. (Continued Below)

Rep. Collins also pointed out that Pelosi ran on legislation but has failed to do anything expect attack President Trump.

“[Democrats are taking] the rules of the House and throwing them in the trashcan. If you want to do [impeachment] properly, by the book, then do that. But Speaker Pelosi, Chairman Nadler, Chairman Schiff, who can’t spell truth, much less tell it… when we understand this, this is the problem we are seeing right now: they are destroying the institution of the House,” the Judiciary Ranking Member added. (Video Below)

“House Democrat ‘investigations’ further reveal ‘impeachment’ as a sham. The House hasn’t authorized a formal impeachment inquiry, and it has no real claim to grand jury information. The Speaker’s press conferences have no legal effect,” Collins tweeted, including the 6e amicus brief he filed.

House Democrat “investigations” further reveal “impeachment” as a sham. The House hasn’t authorized a formal impeachment inquiry, and it has no real claim to grand jury information.

The Speaker’s press conferences have no legal effect.

READ⬇️ I’ve written to Speaker Pelosi to halt the impeachment inquiry until we can receive public answers to the following questions. Given the enormity of the question at hand—impeaching a duly elected president—the American public deserves fairness and transparency. pic.twitter.com/EFKOghyf9w