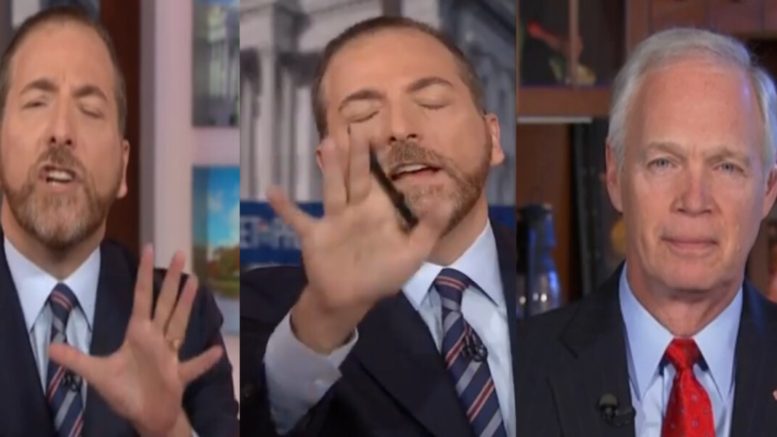 Sen. Ron Johnson (R-WI) spoke with host Chuck Todd on NBC’s “Meet the Press” where they discussed the Ukraine controversy. Johnson defended President Trump as he tried to put things into perspective as to why the President is looking into “corruption”.

Todd began the segment with Johnson by bringing up a quote the senator gave to the Wall Street Journal that indicated Johnson was not comfortable with the idea President Trump may have held back military aid from Ukraine. Johnson, however, accused Todd of bias.

“Let me start with something you told the Wall Street Journal late last week. You had said when Gordon Sunland seemed to imply that the frozen miliary aid was connected to a promise by Zelensky for investigations, you said, ‘At that suggestion, I winced,” Johnson said in the Wednesday piece. “My reaction was: Oh, God. I don’t want to see those two things combined,'” Chuck Todd said.

Asked why did he “wince” and what he meant by those two things combined, Sen. Johnson responded, “Well, first of all, you said a piece that was typically very unbiased.”

Johnson defended President Trump and asserted that the Commander in Chief has never gotten a fair chance from Democrats since the day he was elected. “I’ve never seen a President, after being elected, not having some measure of well wishes from his opponents. I’ve never seen a President’s administration be sabotaged the day after the election. … No measure of honeymoon, whatsoever. And so what President Trump’s had to endure– a false accusation.”

“By the way, you’ve got John Brennan on, you outta ask [him], ‘What did Peter Strzok mean when he texted Lisa Page on December 15, 2016…'” Sen. Johnson proceed to suggest and citing text messages between the former FBI agents, until Todd became flustered and interrupted, “What does this have to do with Ukraine?” he interjected. (Continued Below)

Johnson fired back: “It has everything to do with Ukraine. Now listen, ‘think our sisters have begun leaking like mad. Scorned and worried like political, they’re kicking into overdrive.’ Now that was December 15th. Six days before that, is when we first starting hearing about the CIA leaking about Russia supporting the Trump campaign.”

He continued, “That is why Trump is so upset. He had this false narrative that resulted in him being set up by James Comey on January 16th. Then, he had a judicial house appointed that has hampered his entire administration. And now, once he’s been… that was proven false, he would like to know, and I would like to know and I know his supporters would like to know where did this all come from?”

“Alright Senator, I have no idea why a Fox News conspiracy propaganda stuff is popping up on here. I have no idea, I have no idea why we’re going here. Senator Johnson, please!” Todd declared in frustration. “Can we please answer the question that I asked you, instead of trying to make Donald Trump feel better here that you’re not criticizing him? I’m just trying to ask a simple question of what made you wince?” (Video Below)

“Because I didn’t want those connected … When I asked the President about that, he completely denied it. He adamantly denied it. He vehemently, angrily denied it. He said, ‘I’d never do that.’ Unlike the narrative of the press that President Trump wants to ‘dig up dirt on his 2020 opponent’– what he wants is an accounting of what happened in 2016,” Johnson explained.

Fox News contributor, Dan Bongino wrote on Twitter Sunday: “Chuck Todd is an embarrassment to NBC, if that’s even possible. He’s a full-time liberal activist who has been caught red-handed promoting ridiculous conspiracy-theories and lying to his audience. I feel awful for people that take this hack seriously.”

Chuck Todd is an embarrassment to NBC, if that’s even possible. He’s a full-time liberal activist who has been caught red-handed promoting ridiculous conspiracy-theories and lying to his audience. I feel awful for people that take this hack seriously.