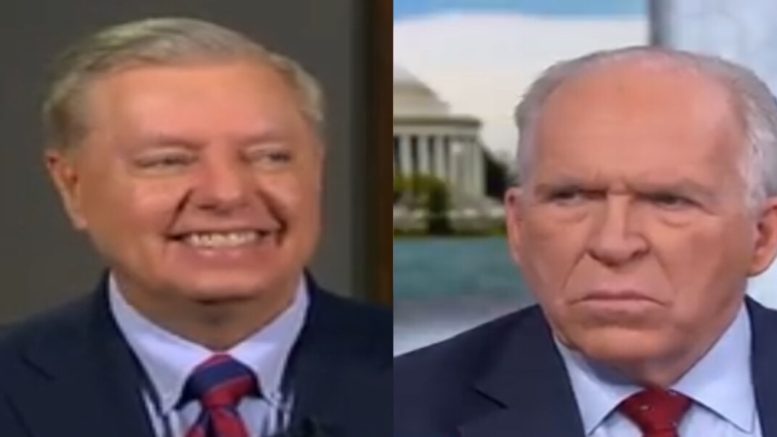 Senate Judiciary Chairman, Lindsey Graham (R-SC), spoke with host Maria Bartiromo on Sunday where he discussed the upcoming DOJ watchdog report into possible FISA abuse and what steps will be taken after the report is made public.

With John Durham’s investigation undergoing that pertains to the origins of the Russia probe, to determine if the FBI’s “spying” on the Trump campaign in 2016 was adequately predicated, former  CIA Director, John Brennan,  admitted during an interview on MSNBC last week, that he is going to be interviewed by Durham. “I’m supposedly going to be interviewed by Mr. Durham as part of this ‘non-investigation’”, Brennan said. “I don’t understand the predication of this worldwide effort to try to uncover dirt, either real or imagined, that would discredit that investigation in 2016 into Russia interference.”

“That’s interesting, that’s pretty rich” Sen. Graham expressed of Brennan’s comments. “I remember when [Robert] Mueller was working with [Rod] Rosenstein. He had to report back to the Department of Justice to look at all things Trump. So this ‘non-investigation’ Mr. Brennan, is around whether or not the FISA court was lied to by the Department of Justice in the FBI. Was the dossier credible enough to get a warrant against an American citizen? [Has] it been verified to this day? Was the counterintelligence investigation opened up against the Trump campaign legitimate? Or was it a way to get around the law to get into the ‘Trump world'”? [Ephasized].

Graham explained that Michael Horowitz, the Inspector General, has been working on the FISA investigation for months and will report back to the South Carolina Senator when it is complete. “I’m not going to do anything until he comes before the committee. He will tell us his view of the FISA warrant application, whether it was off the rails, the counterintelligence investigation– whether it was on the up and up.”

Last month, the DOJ watchdog notified Attorney General William Barr of the completion of his investigation into possible abuses of the Foreign Intelligence Surveillance of Act (FISA) by DOJ officials during the 2016 presidential election. After the DOJ has a chance to review and comment on the report, it will be sent to the Judiciary Committee and made public, according to a letter sent to lawmakers.

“And what is [William] Barr doing? Barr is being an Attorney General trying to find out how the investigation against the Trump campaign began. That is his job, he’s doing exactly what he should be doing. Horowitz is looking inside the system to see if it got off the rails, and my job is to make sure it never happens again,” Graham told Bartiromo. (Continued Below)

Bartiromo put up an “entrapment timeline” surrounding former Trump aid George Papadopoulos, and wondered “Why is that it is always the intelligence agencies coming after President Trump and if that is something that the CIA would put together– gathering international diplomats to reach out to Trump campaign people in 2016?”

Sen. Graham replied, “Stayed tuned. That’s what Horowitz is gonna tell us about and I will build on what he tells us. The dossier, if you believe that foreign interference is wrong in our elections, then you should be upset by the fact that the Democratic National Committee hired a former British spy to investigate Trump by getting ‘dirt’ on him from Russia. The Steele dossier is a bunch of political garbage, unverified to this day.” (Continued Below)

“Why was it included in the intel assessment? Did Brennan have anything to do with that because it is salacious garbage? So we’re gonna find out about all of this and Barr should be going to Italy and the UK and Australia, trying to find out if their intelligence services were working with the CIA or the FBI to investigate the Trump campaign. I’m glad he’s doing that, he should be doing that,” the Senate Judiciary Committee Chairman expressed.

Last week during an interview with Sean Hannity, Graham vowed to send letters to Australia, Italy, and the UK, demanding that they cooperate with the Attorney General.

Bartiromo then told Graham that her viewers are frustrated and want subpoenas. “They want to see you do that ‘deep dive’ into what took place. When can we expect you subpoenaing people and who are you going to get to come down to testify?” she asked directly.

“I’m gonna do it the way I think I need to do it. I’m not gonna get ahead of Horowitz. This man is independent of politics. He was appointed by Obama, he did a good job in the past. I’m gonna look at his report and then, I’ll build out on it. I’m not out to get anybody, I’m trying to find out what happened. So I’m not gonna issue subpoenas because people are frustrated. I’m gonna call Horowitz before the committee. He’s gonna tell us about the FISA warrant application and the counterintelligence investigation. I’ll go wherever the facts take us,” Graham explained.

“But I do want every Republican to ask, ‘Would you impeach the President based on this transcript, this phone call between the President of the United States and the Ukrainian President because if you would, I think that’s just incredibly bad judgment. I want [Mitt] Romney to be asked that. As to having China look into this, I think that’s a bad idea. I don’t trust anything coming out of China against Biden, Trump, me or you,” he added. (Video Below)

“The bottom line is: I want people to do this the right way. The right way is for Horowtiz to come forward to my committee under oath and tell us what happened. And I promise you, I’ll build out on it appropriately. Somebody needs to look at whether the DNC was involved with the Ukraine. … the Bidens, whether or not they violated the law,” Sen. Graham said.

“They sure as hell looked at the Trumps. Somebody needs to look at the Bidens. I want this to be done outside of politics and I want Nancy Pelosi to have the courage to vote on impeachment and not just talk about it,” he concluded.

On Wednesday, Senator Graham urged Prime Ministers of Australia, Italy, and the United Kingdom to continue working with AG Barr as the Justice Department investigates the origins and extent of foreign influence in the 2016 U.S. presidential election.

“That the Attorney General is holding meetings with your countries to aid in the Justice Department’s investigation of what happened is well within the bounds of his normal activities. He is simply doing his job.”

It’s not right Democrats in the House helped the whistleblower prepare their complaint. https://t.co/LpE7y2bVFb

Who were these people?

What were they up to?

Only by full disclosure can President @realDonaldTrump adequately defend against these accusations.