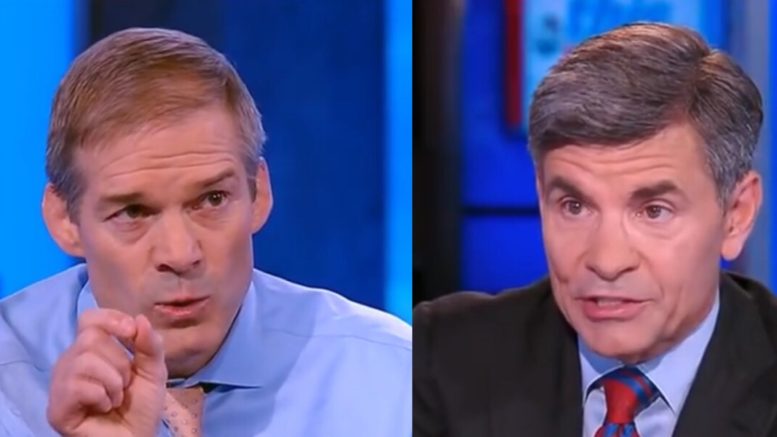 Ranking Member of the House Oversight Committee, Congressman Jim Jordan (R-OH), spoke with host George Stephanopoulos Sunday, during ABC’S “This Week”, pertaining to the whistleblower controversy and highlighted how President Trump wants to “root out corruption”.

Jordan made the case that President Trump has an obligation to investigate, and he sparred with Stephanopoulos after he pointed out that the media is giving Joe Biden a pass, along with helping House Intelligence Committee Chairman, Adam Schiff (D-CA), further his “impeachment agenda.”

Stephanopoulos began the interview by asking Rep. Jordan if it is appropriate for President Trump to ask China and Ukraine to investigate Joe Biden. Jordan replied, “George, do you really think he was serious about thinking that China is gonna investigate the Biden family? I think he’s getting the press all spun up about this. Remember, this is the President, who’s been tougher on China, than any other President.”

Jordan clarified by pointing out the tariffs President Trump has put on China and said, “The same guy that’s been tougher on China now thinks China is gonna investigate the Bidens? He was just making a statement to underscore how wrong it is– what took place here with Hunter Biden getting these deals that he got. That’s all he’s doing.”

“I wish there would be same outrage for what the President said about China, … the same outrage when we saw when the Clinton campaign and the Democratic National Committee hired a foreigner, who worked with Russians to ‘dig up dirt’ on the President, put it in a document that was given to the Department of Justice and then, the FBI used that document to go to a secret court to spy on the Trump campaign. And you guys weren’t outraged about that, but now, the President makes a statement about China, and you think this is somehow a big deal,” Jordan expressed as he pointed out the media’s hypocrisy.

“I think [President Trump] is saying what’s on the minds of so many American’s; how does the Vice President’s son get a billion dollars from a bank, a subsidiary of the bank of China. How does he get that deal, just a couple of weeks after he flies on Air Force Two to China? I think he’s just pointing out the facts. I don’t think he’s really saying ‘Oh, China! Go investigate the Bidens,'” Jordan added when asked why Trump would ask China to look into Biden. (Continued Below)

Asked again if it was appropriate to ask China to investigate, Jordan said, “I think when the President is trying to make sure that there is not corruption, that if we’re gonna be sending the hard-earned tax dollars of the American people to Ukraine to help them fight Russia, to help them get their country moving in the direction they need, the security assistance they need. I think he believes that we should make sure there’s not corruption there.”

Asked in a different way, if it was appropriate for President Trump to ask Ukraine to investigate corruption into one of his political rivals, Jordan again responded, “George, we heard from the Ambassador for hours. [He] told us there was no quid pro quo, there was no linkage between any type of security assistance money and any type of investigation. The Ambassador was clear, we have the transcript where this is no quid pro quo. Even [the] Democrat Chairman said after reading the transcript, there is no quid pro quo. And the two people on the call: President Trump and President Zelensky.” (Video Below)

Jordan also pointed out that Schiff released “selective texts”, and asked, “Why [won’t] he release the whole transcript? Why won’t he do it? The President released the call, unprecedented. He released the call with a foreign leader. Why won’t Adam Schiff do the same thing?”

“There was 67 pages of text messages,” Jordan revealed. “Why only a few handfuls selected and highlighted by the Democrats? The same Democrat staff, who by the way, met with this whistleblower before he even filed the complaint, and Adam Schiff wouldn’t tell us that. The same Adam Schiff, who did the false statement at the start of the hearing a week ago. The same Adam Schiff, who met with Michael Cohen for 10 hours, before Michael Cohen testified.”

Rep. Jordan tweeted on Sunday after the interview, “It is absolutely appropriate for the President to call for rooting out corruption in any country with whom we do business. The media is giving legitimate corruption concerns a total pass, misconstruing the facts, and helping further @RepAdamSchiff’s impeachment agenda.”

It is absolutely appropriate for the President to call for rooting out corruption in any country with whom we do business.

Rep. Jim Jordan’s full interview in the two videos below:

(Related: Joe Biden Explodes On Reporter Who Asks About His Son’s Ukraine Dealings: ‘I’m Not Going To Respond To That’)