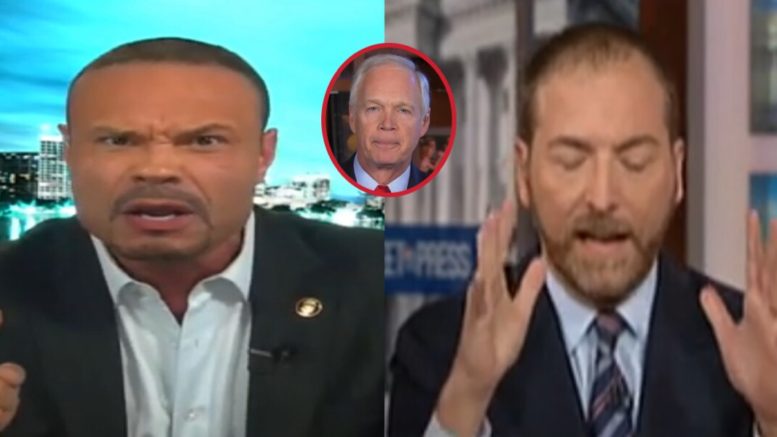 Sunday on NBC’s “Meet the Press”, Sen. Ron Johnson (R-WI) spoke with host Chuck Todd where they discussed the Ukraine controversy. Johnson defended President Trump as he tried to put things into perspective as to why the President is looking into “corruption”. Todd, however, flipped his lid when Johnson brought up former FBI agents Peter Strzok and Lisa Page. The NBC host lashed out, “I have no idea why a Fox News conspiracy propaganda stuff is popping up on here.”

“I’m telling you right now, [Sen. Johnson] should’ve walked off that set,” Dan Bongino said. “Chuck Todd is a disgrace to humankind. How this guy pretends still to be a journalist to this day is an embarrassment. Calling out this network?”

Bongino held up an article from Politico that was written January 2017, entitled, “Ukrainian efforts to sabotage Trump backfire” and asked, “I don’t usually do props. … Does that say Fox News at the top? … That says, Politico! It doesn’t say Fox News.”

“Chuck Todd needs to resign in absolute disgrace!” Bongino declared. “He should issue a full-throated apology to Ron Johnson, and no credible Republican should appear on that network again. And let’s just get one thing straight: Chuck Todd, who works for NBC of all places, the network that hosts Roswell Rachel, who for two years hosted people swearing the ‘collusion hoax’ was real. We’re the conspiracy network? [We] actually nailed this story from day one. We’re the conspiracy network?”

He asked if the Politico story was a theory and wondered what is a theory. “Did Hunter Biden work at Burisma in Ukraine? Yes, fact. Was the prosecutor investigating that lucrative deal for Biden’s kid fired by, and did Biden go on tape wanting fired? Fact! Those are facts, that’s not a theory. The fact that NBC is not remotely interested in getting to the bottom of why that may have happened, that’s their problem as a ‘fake news network!'” Bongino expressed. (Continued Below)

“But don’t you dare, dare, go on the air, you partisan hack! You loser! And call this network out, [be]cause we have nailed this story for two straight years, while you poked fun at us and poked the bear. That was a disgraceful episode,” Bongino fired off. “This is very upsetting what happened to this guy.”

Bongino reiterated that Chuck Todd needs to resign adding that he also needs to apologize. “What a joke!”

“That’s why their ratings are in the can! That’s why Rachel Maddow– people are leaving her show in droves because you can only get ‘hoaxed’ for so long by these people,” he added. (Video Below)