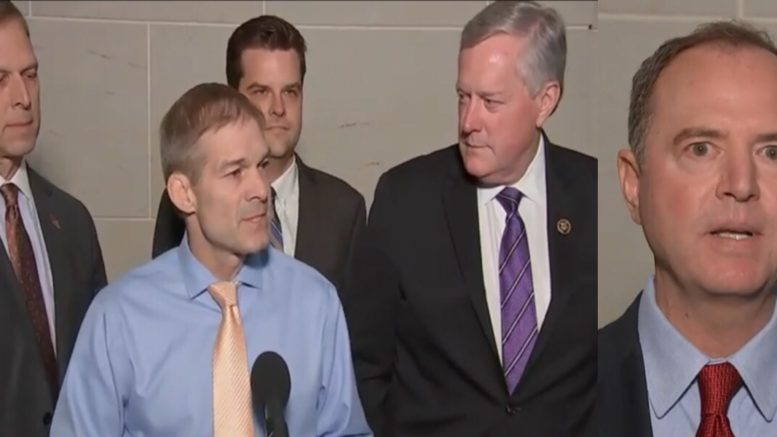 On Tuesday, the State Department blocked EU Ambassador Gordan Sondland from testifying before the House Intelligence Committee, in regards to the phone call between President Trump and Ukrainian President Zelensky.

Sondland’s lawyer, Robert Luskin, released a statement beforehand that reads in part, “Ambassador Sondland hopes that the issues raised by the State Department that preclude his testimony will be resolved promptly. He stands ready to testify on short notice, whenever he is permitted to appear.”

The Democratic Chairman of the House Intelligence Committee, Adam Schiff (D-CA), complained that Sondland used a personal device in his text messages and emails that he thinks are relevant to the investigation. He also gave a statement to reporters on Tuesday, but he took no questions from the press and immediately left.

“Withholding of the Ambassador’s documents, as well as efforts that may be made to discourage or having the effect of discouraging other State Department witnesses from coming forward and testifying, as they have agreed to, to be ‘further acts of obstruction’ of a coequal branch of government,” Schiff said in part.

Republicans also held a press conference after Schiff and said it was essential that the Democrats that control the committees, release the “full transcript” from Ambassador Volken’s transcribed interview last week. They believe the testimony of Ambassador Kurt Volker will “blow a hole” in the narrative that Democrats are trying to portray concerning “quid pro quo.”

Rep. Jim Jordan (R-OH) asked, “Why not release the transcript, so you can all see what Ambassador Volker told us? There is no wrongdoing.” (Continued Below)

President Trump tweeted on Tuesday, “I would love to send Ambassador Sondland, a really good man and great American, to testify, but unfortunately, he would be testifying before a totally compromised kangaroo court, where Republican’s rights have been taken away, and true facts are not allowed out for the public to see. Importantly, Ambassador Sondland’s tweet, which few report, stated, ‘I believe you are incorrect about President Trump’s intentions. The President has been crystal clear: no quid pro quo’s of any kind.’ That says it ALL!”

Along with Rep. Jim Jordan blasting Schiff during the press conference, Congressmen Mark Meadows (R-NC), Matt Gaetz (R-FL) Scott Perry (R-PA) and Lee Zeldin (R-NY) also voiced their frustration at the Committee Chairman after he refused to be transparent to the American people. The Republican lawmakers, however, took questions from reporters.

“Absassor Volker testified about how the readouts of the phone call that was made to him– that there was nothing in the readouts about there being a hold on U.S. aid or a quid pro quo. Or this is what the transcribed interview would tell you if you asked this question, and I’m glad we’re having this discussion,” Rep. Zeldin said to reporters. “The next day, Ambassador Volker meets with Zelensky and in that meeting, there is no reference to a quid pro quo or President Zelensky having any idea that there’s a hold on aid.” (Continued Below)

“And by the way, you know what else Ambassador Volker testified to? This entire time, the aid was getting released, it was going to get released. And guess what happened? The aid got released. And you know what didn’t have to happen? There was no new investigation that had to get created. This whole thing is a ‘fairytale’. Adam Schiff is misleading you, and you’re playing along with him, many of you are. And the America public is then getting deceived,” Zeldin explained.

He clarified, “When Adam Schiff said, for example, said, ‘President Trump was asking President Zelensky to ‘manufacture dirt’ on the Bidens’, you know what Ambassador Volker testified to? That was absolutely untrue. And that’s what we would call an inconvenient fact for the narrative. You know what else Adam Schiff has been saying to you and the American public that was not true? That he had no contact with the whistleblower. He lied! You know what else he lied about? When he gave his opening statement in front of the Acting Director of National Intelligence, as to what was in it, in front of the world.”

Zeldin noted that he and his colleagues were ready to do their part. “If anyone is going to testify behind those closed doors, we’re gonna make sure that we’re there to ensure that the other 99% of this story is being told. Because guess what? If we weren’t there last Thursday, you would have no idea everything Ambassador Volker said to ‘obliterate Adam Schiff’s fairytale quid pro quo charge!’ You’d have no idea, so we’re here.

Rep. Jordan pointed out, “Think about what the Democrats are trying to do – impeach the President of the United States 13 months prior to an election, based on an anonymous whistleblower with no firsthand knowledge, who has a bias against the President. Adam Schiff didn’t tell us [he met with the whistleblower before]. The way he treated Ambassador Volker in this interview last week… that treatment is the reason why the administration and the State Department said ‘We’re not gonna subject Ambassador Sondland to the same treatment.'” (Continued Below)

“When you have a Speaker of the House, who says ‘strike while the iron is hot’, and you have a Chairman, who is so biased against this President, that he wouldn’t even tell us that he met with the whistleblower prior to filing the complaint. And frankly, this is a pattern with Mr. Schiff. He did the same thing … with Michael Cohen. He didn’t tell us last summer that he met with Mr. Simpson, out in Colorado with the guy from Fusion GPS,” Jordan said.

“We understand exactly why the administration and State Department has said look, ‘If it’s gonna be this kind of process, if you’re going to selective leak text messages’, 67 pages of text messages we have, and they take a handful, and not give the full context and not release the transcript, we understand why they made this decision at this moment,” Jordan added.

The chairs of the House Intelligence, Foreign Affairs, and Oversight committees announced Tuesday that they intend to subpoena U.S. Ambassador to the EU Gordon Sondland.

“These actions appear to be part of the White House’s effort to obstruct the impeachment inquiry and to cover up President Trump’s misconduct from Congress and the American people.  Ambassador Sondland’s testimony and documents are vital, and that is precisely why the Administration is now blocking his testimony and withholding his documents.” Chairmen Adam Schiff, Eliot Engel, and Elijah Cummings said. (Video Below)

President Trump also asked on Twitter Tuesday, following the Republican’s press conference, “Hasn’t Adam Schiff been fully discredited by now? Do we have to continue listening to his lies?”

….to see. Importantly, Ambassador Sondland’s tweet, which few report, stated, “I believe you are incorrect about President Trump’s intentions. The President has been crystal clear: no quid pro quo’s of any kind.” That says it ALL!

Hasn’t Adam Schiff been fully discredited by now? Do we have to continue listening to his lies?