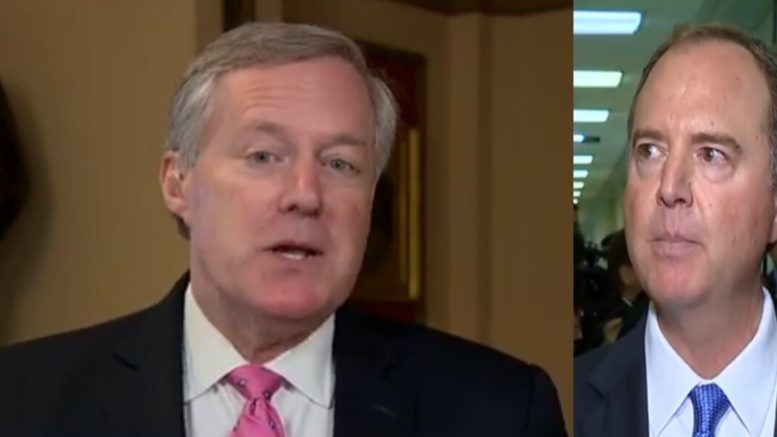 Biggs introduced a motion to condemn and censure Schiff for his false retelling of the conversation between President Trump and Ukraine President Zelensky, when Acting Director of National Intelligence Joseph Maguire, testified before the Intel committee pertaining to the whistleblower complaint.

“I support that [censure]. Chairman Biggs has reached out to all our Freedom Caucus members,” Meadows said. “Listen, Chairman Schiff is not a ‘neutral arbitror’. We saw that when he made up the transcript– the actual conversation he did, what he called a ‘parody’, most of America didn’t know it. He made that up.”

“And then, what we also saw, I was actually in the interview with Ambassador [Kurt] Volker for almost 10 hours. What we saw were releases of text messages that didn’t actually correspond with the unbelievable testimony of then Ambassador Volker had. Let’s release those transcripts. This is all about politics. This is all about Adam Schiff trying to make sure President Donald Trump doesn’t get reelected,” he explained.

Meadows said that House Speaker Nancy Pelosi (D-CA) is obviously not going to remove Adam Schiff as she “partisan” in the effort to remove the President. “But here’s what we do: she could actually change the jurisdiction back to where it should be. She could have a vote on the House floor. She could give protections to the President.”

“Listen, hardened criminals have better protections than the President of the United States right now on the way that this investigation is being conducted,” he suggested. (Continued Below)

On Wednesday, Rep. Ralph Abraham (R-LA) introduced a resolution to “expel” Speaker Nancy Pelosi from the House of Representatives as Democrats continue their impeachment inquiry against President Trump.

“Nancy Pelosi’s vicious crusade against our lawfully-elected President is nothing more than a politically-motivated witch hunt and it must be stopped,” Abraham said in a statement. “She has disgraced the people’s House and weaponized the Speaker’s gavel for her party’s political gain.”

Abraham added: “House Democrats spent nearly three years obsessed with election meddling only to dwarf any such efforts with their own deceitful plan to nullify the 2016 election and prevent President Trump from winning in 2020. I have introduced a resolution calling for her to be expelled from the House and for the Speaker’s Office to be vacated.” (Video Below)

Abraham’s resolution reads simply: “Resolved, That pursuant to Article 1, Section 5, Clause 2 of the United States Constitution, Representative Nancy Pelosi be, and she hereby is, expelled from the House of Representatives and the Office of the Speaker is declared to be vacant.”

As of this week, there are 100 House GOP co-sponsors of Rep. Andy Biggs’ motion to censure Adam Schiff. (See below)

Today I introduced a resolution to expel Nancy Pelosi from the House of Representatives. This witch hunt has to end. https://t.co/2hfvkG711V

#FoxNews has learned there are now 98 House GOP co-sponsors of the @RepAndyBiggsAZ motion to censure Chairman Adam Schiff-> pic.twitter.com/TEZ7InszlL

#FoxNews has learned there are now 100 House GOP co-sponsors of the @RepAndyBiggsAZ motion to censure Chairman Adam Schiff-> pic.twitter.com/gjcHUY0lhk