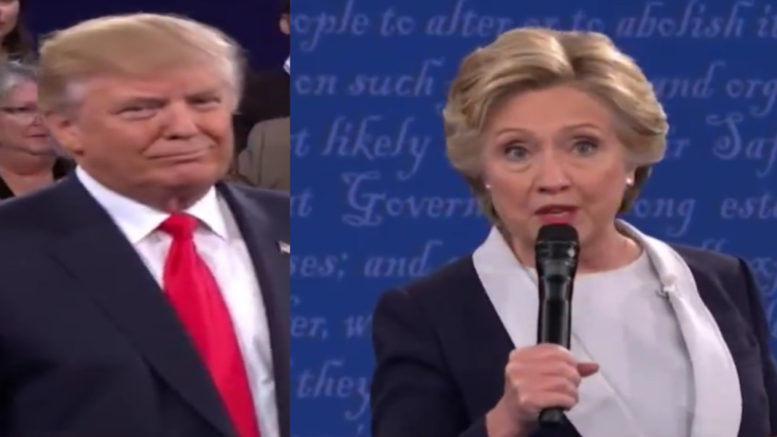 Twice failed Democratic presidential candidate and former Secretary of State, Hillary Clinton, took to Twitter on Thursday responding to President Donald Trump after the Commander in Chief taunted her on Twitter about her “high crimes and misdemeanors” pertaining to Clinton’s 33,000 deleted emails.

Clinton also claimed during an interivew on PBS News Hour Tuesday that she could beat President Trump “again” if she decides to run for president in 2020.

“It truly is remarkable how obsessed he remains with me,” Clinton said in her interview. “But this latest tweet is so typical of him. Nothing has been more examined and looked at than my emails. We all know that. So he’s either lying or delusional or both. So maybe there does need to be a rematch. Obviously, I can beat him again. But, just seriously, I don’t understand, I don’t think anybody understands what motivates him, other than personal grievance, other than seeking adulation.”

On Wednesday, the President recommended that “Crooked Hillary” should run again writing on Twitter, “I think that Crooked Hillary Clinton should enter the race to try and steal it away from Uber Left Elizabeth Warren. Only one condition: The Crooked one must explain all of her high crimes and misdemeanors including how & why she deleted 33,000 Emails AFTER getting ‘C’ Subpoena!” he declared.

He included a video of the famous moment during the 2016 presidential debates between him and Clinton where she claimed, “It just awfully good that someone with the tempermant of Donald Trump is not in charge of the law in our country,” to which Trump shot back, “Because you’d be in jail!” (Continued Below)

Hillary Clinton responded to President Trump on Twitter Thursday: “It’s becoming a challenge to keep up with the high crimes and misdemeanors.”

After Clinton’s tweet suggesting the President is the one with “high crimes and misdemenors” Twitterverse immediately responded and it appeared to backfire in her direction. (Continued Below)

Don’t tempt me. Do your job.

It's becoming a challenge to keep up with the high crimes and misdemeanors.

Here are a few responses from Twitterverse in response to Hillary Clinton:

True… You should really stop doing them. https://t.co/XK5klLaYMQ

How many are you up to, now?

“Dear Diary — it's becoming a challenge to keep up with my high crimes and misdemeanors.”

Ready to turn over those 30,000 emails yet and tell us what classified information you compromised? 🤔

yet you stayed married to him anyway

Maybe you can check for them in your email🤷🏼‍♂️

We leave you with a classic video from a parody twitter account for Rep. Steven Smith, in which James Comey explains what was contained in Hillary Clinton’s emails: