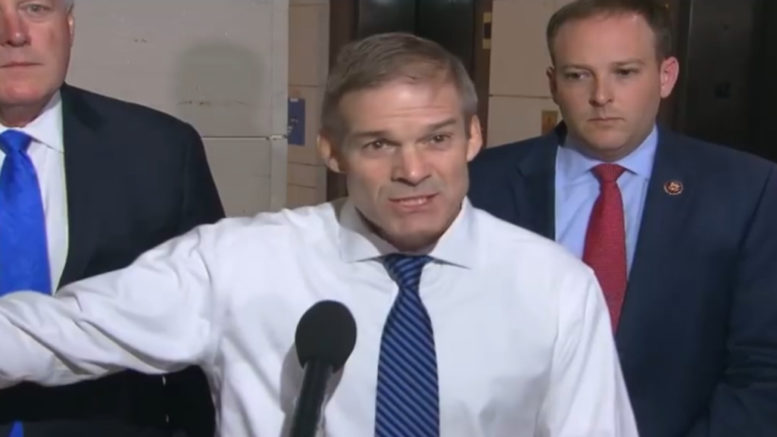 The deposition comes as Democrats are expected to continue calling additional witnesses throughout the week, pertaining to their impeachment inquiry efforts. Republicans, however, have criticized the proceedings, saying they should be public and that they are a partisan campaign against President Trump.

The reporter tried again, “But don’t you think there’s a much larger circle of people who are all saying the same thing as the whistleblower?”

“Let’s remember how this all started. The individual who started it all got a readout of the call between President Trump and President Zelensky, writes a memo the next day– uses terms like ‘scary, frightening, crazy’ and then, waits 18 days to file a complaint? And who is the first person he runs off and sees in that 18-day interim? Adam Schiff’s staff,” Jordan declared. (Continued Below)

“And you don’t the American people have the right to know who the individual is? Come on! We’re talking 300 and 30 something million people in this country,” Jordan expressed. “We’re talking about removing the President of the United States, the leader of the free world, based on that? That guy’s memo? That guy’s complaint? Who the first people he talks to is Adam Schiff, who’s running this closed-door session? This closed-door process? I think the American people would like to know.”

The reporter then asked, “So, you think he has no right to anonymity?”

“He has the right to protection. That’s what the whistleblower statute says. It doesn’t say anonymity. And I think when you’re talking about the President of the United States, for goodness sakes, the American people. The American people, who we all represent, they have a right to know,” Jordan explained. (Video Below)

The Ohio Congressman also tweeted Tuesday, “Only a handful of the 300+ million Americans know who the ‘whistleblower’ is. The person who: -Started this process based on secondhand hearsay -Talked about it to Schiff’s staff -Has a political bias against @POTUS -Reportedly had a professional link to Biden”.

President Trump on Monday wrote on Twitter amid Schiff changing his tune on the Whistleblower testifying: “Adam Schiff now doesn’t seem to want the Whistleblower to testify. NO! Must testify to explain why he got my Ukraine conversation sooo wrong, not even close. Did Schiff tell him to do that? We must determine the Whistleblower’s identity to determine WHY this was done to the USA.”

Only a handful of the 300+ million Americans know who the “whistleblower” is. The person who: