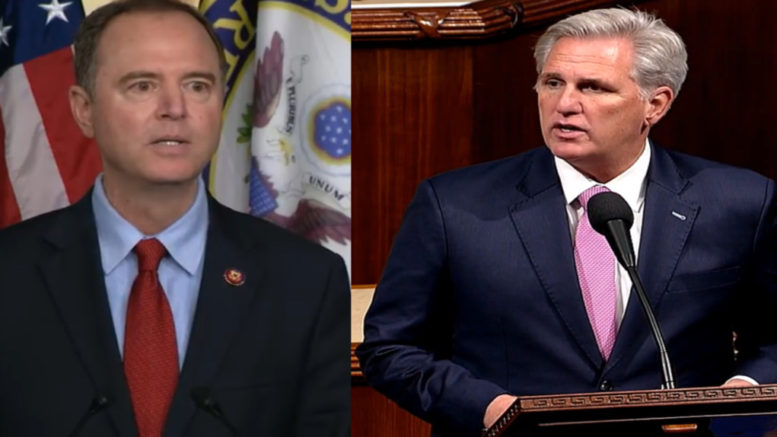 House Minority Leader, Kevin McCarthy (R-CA), spoke on the House floor Wednesday where he urged the House of Representatives on both sides of the aisle to condemn and censure House Intelligence Committee Chairman, Adam Schiff (D-CA), after he was caught lying and also made up a conversation between President Trump and Ukrainian President Zelensky, during a congressional hearing where he called it a “parody”.

Congressman Andy Biggs (R-AZ) announced the pursuit of a motion to condemn and censure Schiff, with around 150 members in Congress who have signed it. The House will vote on October 21st on the resolution.

Rep. Kevin McCarthy praised Biggs for his resolution and said on the House floor Tuesday, “We have a solemn duty to find the facts, to be stewards of the truth. It is the truth that must guide our work. When the truth is contorted, twisted and disregarded, the American people lose. The fabric of the institution starts to erode. Sadly that is exactly what is happening with the House Intelligence Committee under the Democratic leadership.”

McCarthy explained that it “should not have to come to this”, pointing out that Adam Schiff has “used his position to mislead the American people.”

“But this resolution is about more than the action of one individual,” the House Minority Leader said. “When false evidence is entered into the official record or communicated directly to the American people, the people’s House loses the credibility it needs to function properly. If the credibility is not restored, if the American people cannot trust that the process will be fair and that the information will be honestly shared, they will lose trust in the soundness of our system of government.”

McCarthy explained the resolution introduced by Freedom Caucus Chairman, Andy Biggs, is “to protect the integrity of our proceedings, which censure is designed to do– to restore a process which is fair, objective, and fact-based. And to reassure the American people that the stakes and intensity of our current debate will not overwhelm their government.” (Continued Below)

“We face a critical moment in the life of Congress and the history of this country. History will judge what happens on this floor,” Mcarthy expressed.

“This is not a decision we take lightly, but it is the right thing to do. We serve on this floor as Americans, not as a party. We have to stand for truth. We have to stand for a committee that many of us don’t even have the capability or the opportunity to read what happens. We put trust into those individuals, to be honest with us and the American public. That is why I urge all my colleagues to join me in support of this resolution, to bring integrity back to this floor and to this body,” the House Minority Leader added.

McCarthy also posted the resolution on Twitter and tweeted, “We are calling up a resolution that condemns Chairman Adam Schiff and the way he has abused his power to mislead the American people.” (Video Below)

Thank you, @GOPLeader, for your leadership and support of my motion to condemn and censure Adam Schiff. Together, we are working to hold him accountable for misleading the American people. pic.twitter.com/MnInXVpXSC

We are calling up a resolution that condemns Chairman Adam Schiff and the way he has abused his power to mislead the American people. Read the complete censure resolution here: pic.twitter.com/sLDazCXRMz

To find your Representative and urge them to vote to censure Schiff: [Click Here]

House Republicans also tweeted a video that explains why Schiff “can’t be trusted to run a fair investigation”:

He can’t be trusted to run a fair investigation. pic.twitter.com/bYAQNaQQtZ