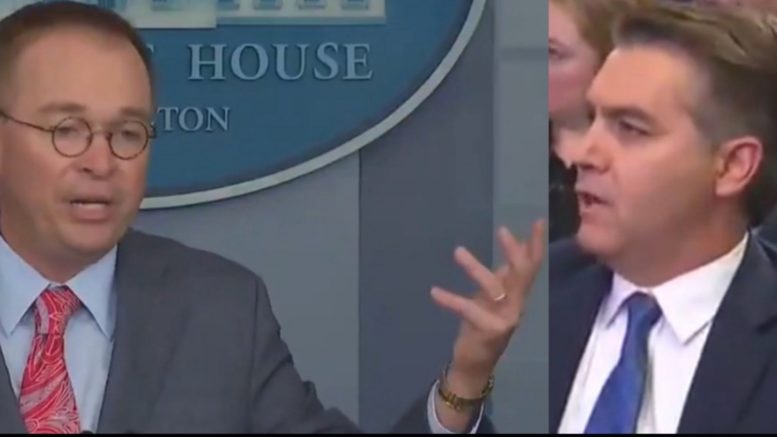 This comes amid the controversy surrounding President Trump’s phone call with Ukrainian President Zelenksy, despite the White House having released the transcript of the conversation.

“To the question of Ukraine, can you clarify– was the President serious when he said he would also like to see China investigate the Bidens? And you were directly involved in the decision to withhold funding from Ukraine. Can you explain to us now definitively why? Why was funding withheld?” ABC’s Jonathan Karl asked Mick Mulvaney.

“It should come as no surprise to anybody … one of the questions ya’ll would always ask me about the budget is ‘what are ya’ll doing to the foreign aid budget’? [Be]cause we absolutely gutted it, right? President Trump is not a big fan of foreign aid, never has been, still isn’t. He doesn’t like spending money overseas, especially when it’s poorly spent,” Mulvaney explained. “And that is exactly what drove this decision.”

He said that “everybody knows” that Ukraine “is a corrupt place”, adding, “By the way, put this in context on the heels of what happened in Puerto Rico, when we took a lot of heat for not wanting to give a bunch of aid to Perto Rico [be]cause we thought that place was corrupt. And by the way, it turns out we were right. So put that as your context. … I don’t want to send them a bunch of money and have them waste it, have them spend it, have it to line their own pockets.”

Mulvaney also stated that he is not sure if other European countries are helping Ukraine either. “So we actually looked at, when we cut the money off before it flowed because the money actually flowed by the end of the fiscal year. We did an analysis of what the other countries were doing in terms of supporting Ukraine. What we found out was zero or near zero, from European countries for lethal aid. … That was the driving factor[s],” he noted. (Continued Below)

“Did [Trump] also mention to me, in the past, the corruption related to the DNC server?” Mulvaney asked. “Absolutely. No question about that. But that’s it. And that’s why we held up the money. …The look back to what happened in 2016 certainly was part of the thing that he was worried about in corruption with that nation. And that is absolutely appropriate.”

When asked about criticism that the administration’s dealings with Ukraine and if it amounted to a quid pro quo, Mulvaney said, “We do that all the time with foreign policy. … And by the way, this speaks to an important point, because I heard this yesterday. [Michael McKinley] said yesterday that he was really upset with the political influence in foreign policy. That was one of the reasons he was so upset about this.”

“And what you’re seeing now, I believe, is a group of mostly career bureaucrats, who are saying ‘You know what? I don’t like President Trump’s politics, so I’m gonna participate in this witch hunt’, that they’re undertaking on the hill. Elections do have consequences and they should. Your foreign policy is going to change. Obama did it one way, we’re doing it a different way and there’s no problem with that,” Mulvaney added.

As he went to take a question from another reporter, CNN’s Jim Acosta blurted out, “What about the Biden’s though, Mr. Mulvaney? Did that come into consideration when that money was held up.”

Mulvaney brushed off Acosta and replied to the reporter, “I’m sorry, I don’t know your name. He’s being ‘very rude’, so if you’ll go ahead and ask your question.” [Emphasized].

*Update: MickMulvaney issued an update: “Let me be clear, there was absolutely no quid pro quo between Ukrainian military aid and any investigation into the 2016 election. The President never told me to withhold any money until the Ukrainians did anything related to the server.” (Video Below)

Acosta took to Twitter to complain after the briefing, “Mulvaney refusing to take a question from CNN = badge of honor. Thanks Mick!”

Mulvaney refusing to take a question from CNN = badge of honor. Thanks Mick!