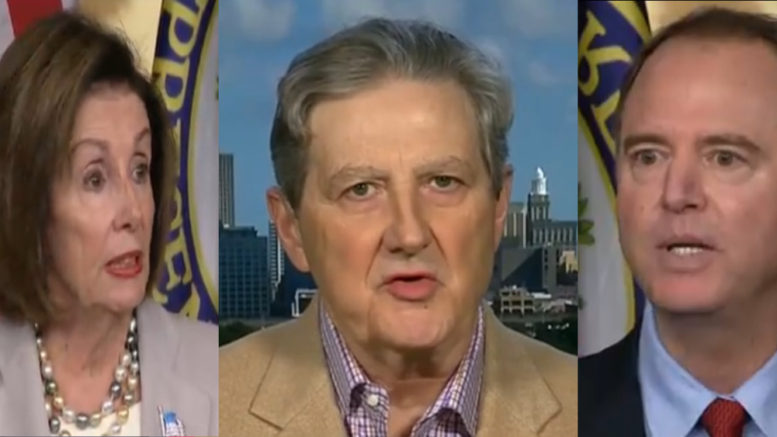 Cavuto explained that it seems inevitable that the House Democrats will move forward with the vote to impeachment. “They will do that. Then what,” he asked Senator Kennedy.

Sen. Kennedy said, “I don’t think you’re wrong. When I watch the House impeachment proceedings I am both perplexed and appalled.”

The Louisiana Senator clarified: “Here’s what I hear Speaker Pelosi and Chairman Schiff saying to the American people: ‘You’re stupid, and we’re smart'”.

Sen. Kennedy reiterated that he finds that “appalling and perplexing”, because he said that he reads stories about House Speaker Pelosi (D-CA) that explain what an “extraordinary, talented politician she is and how she’s a strategic thinker and a major tactician,” adding, “And I think to myself, does she really believe the American people are gonna fall for this? I mean, I know that Speaker Pelosi is a smart lady, she’s not dumb. If this were anyone else, I’d be thinking to myself, it must suck to be that dumb.” (Continued Below)

Speaker Pelosi currently hasn’t held a vote to start formal impeachment in the House, and during a press conference Tuesday, she announced that the House of Representatives will not hold a vote authorizing an impeachment inquiry “at this time”, despite having said last month that Democrats are moving forward with an “impeachment inquiry.

“[T]here’s no requirement that we have a vote, and so, at this time, we will not be having a vote,” the House Speaker said.

House Republicans, however, have argued that Speaker Pelosi and House Intelligence Chairman Adam Schiff (D-CA) are making up the rules as they go, calling it a “total sham.” (Video Below)

House Democrats have made clear their move for impeachment has nothing to do with the Framers’ vision of impeachment. For House Democrats, it’s not about defending the Constitution against a usurper; it’s merely a political response to an election they still cannot believe they lost.

They’ve made clear from even before President Trump was inaugurated that they believe him to be an illegitimate president, and every action they’ve taken since then proves their determination to kowtow to their left-wing base, the left-wing base that demands “resistance” in all its forms.

First, they wanted to remove him over the allegation that he was a traitor who had worked with Russians to undermine our freedoms in the 2016 election. When that narrative collapsed after a two-year investigation failed to prove it, they shifted to “obstruction of justice.” But that effort, too, came up short, so they have now shifted to this new charge — that he abused his office by seeking the assistance of a foreign government for personal political gain. (Continued Below)

Moreover, the Democrats’ likely second article of impeachment — that moving the official record of the phone call from one server to another is evidence of an attempt to “cover-up” wrongdoing — doesn’t hold water, either. It turns out the decision to move similar records happened long ago and was not confined to this one phone call.

Convicting an impeached president requires a two-thirds vote. That’s 67 senators. But Democrats only have 47 (if we assume Maine’s Angus King and Vermont’s Bernie Sanders, two independents who caucus with Senate Democrats, behave as Democrats on this vote).

Thus, it would require 20 Republican senators to vote to convict. That’s just not going to happen.

(Related: Mitch McConnell Rips Democrats Over Their ‘Impeachment Obsession’: ‘Fairness and Due Process Are Not Their Objectives Here’)