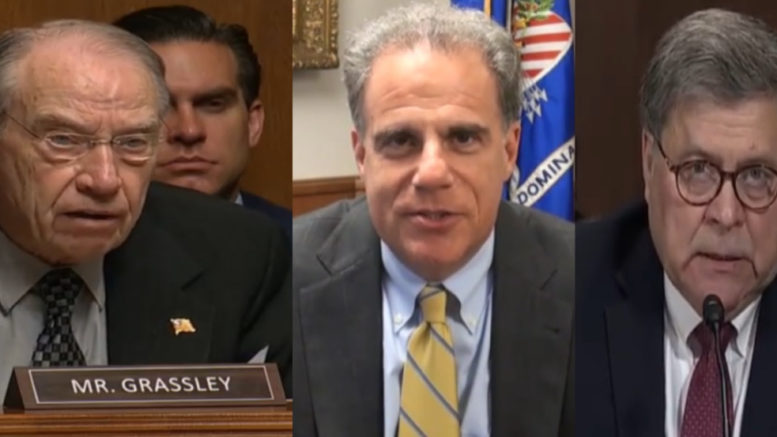 Sen. Chuck Grassley (R-IA) took to Twitter Monday where he expressed his suspicion over the delay of the Justice Department Inspector General’s report into possible abuses of the Foreign Intelligence Surveillance of Act (FISA) by DOJ officials during the 2016 presidential election. Grassley has been one of the Senate Republicans who has pushed for answers from the FBI and Justice Department about the Steele dossier and “spying” against the Trump campaign.

Last month, DOJ watchdog, Michael Horowitz, notified Attorney General William Barr of the completion of his investigation and sent it over to Barr to review, then it will be sent to the Judiciary Committee and made public, according to a letter sent to lawmakers.

Michael Horowitz, in his letter to lawmakers, reads in part, “My direction to our team has been to follow the evidence wherever it leads and to complete the review as quickly as possible. Consistent with this guidance, the team has reviewed over one million records and conducted over 100 interviews, including several witnesses who only recently agreed to be interviewed. We have now begun the process of finalizing our report by providing a draft of our factual findings to the Department and FBI for classification determination and marking. This step is consistent for our process with reports such as this one that involve classified material.”

Sen. Chuck Grassley, however, questioned whether the “deep state” has somehow slowed the release of the document.

He wrote on Twitter Monday, “All of the delays and excuses why the Horowitz IG FISA report isn’t public yet after several months of anticipation of its issues leads me to the suspicion it’s going to be ‘deep six’ by the deep state.”

The OIG report was initially expected to be released in June but has been steadily delayed amid new developments, including an interview that same month with Christopher Steele, a former MI6 officer, who dug up dirt on the Trump campaign on behalf of the DNC and Clinton campaign and compiled the Steel dossier. (Continued Below)

Michael Horowitz, the inspector general, began in March 2018 investigating whether the FBI complied with legal requirements in applications for Foreign Intelligence Surveillance Act (FISA) warrants against Trump campaign aide Carter Page. The bureau relied heavily on the unverified Steele dossier in applications for the warrants, as well as for the main investigation into possible collusion between the Trump campaign and Russian government.

In the dossier, [Steele] alleged that Trump aides, including Page, worked with Kremlin operatives to influence the 2016 election. Steele also claimed that there was a “well-developed conspiracy of coordination” between the Trump team and Russians. But the special counsel’s report undercut much of the dossier. It said there was insufficient evidence to establish a Trump-Russia conspiracy. (Continued Below)

Former Arkansans Governor Mike Huckabee took note of Grassley’s tweet and said, “There’s not a more thoughtful and honorable man in the Senate than [Chuck Grassley] and when he fears the deep state, rest assured we should ALL be concerned about it.”

There's not a more thoughtful and honorable man in the Senate than @ChuckGrassley and when he fears the deep state, rest assured we should ALL be concerned about it. https://t.co/USVhLTjYx1

We leave you with Sen. Chuck Grassley questioning Attorney General William Barr in May on whether the special counsel’s investigation into Russian interference in the 2016 election should have looked into how the investigation began and considered whether the Steele dossier was part of a Russian disinformation campaign.